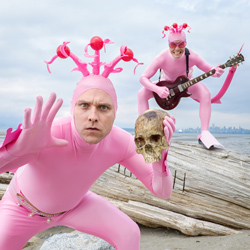 What do astronaut John Glenn, president Bill Clinton, and sea monkeys have in common? Before this play I had absolutely no idea. But then again, history isn’t one of my strengths. For that matter, politics, the news, and random fun facts aren’t either. Those of you for whom they are (or if, unlike me, you were born before the 1990s), you might already know that both American heroes were pretty big media sensations in 1998—Clinton for his infamous scandal with Monica Lewinsky, his friend Glenn for returning to space at 77 years of age. If you’re really clever (or have read some relevant Wikipedia articles), you’ll also know that Glenn took four hundred million sea monkeys to space with him. The world still doesn’t know why. Instant Life unfolds a conspiracy theory beyond your wildest dreams to explain a possible cover-up.

Instant Life is exceedingly entertaining; it’s the most fun I’ve had at the Fringe this year. Playwright-performer-musician-technicians Eric Hinch and Paul Surjadinata outdo themselves in this plot-driven, multi-media, two-man show. The duo balance at least eight different characters and stage a complex sequence of daydreams, press conferences, phone calls, projections, and musical interludes, taking audiences on a thrill ride into the excitement of 1998 reporting, politics, and space travel. And, of course, the secret life of sea monkeys.

Hinch and Surjadinata also prove themselves incredibly perseverant and adaptable entertainers in the face of the sheer number of obstacles they faced on their opening night. Every time I thought they had overcome their last hurdle, something else would go awry. Sea monkey outfits underwent repeated costume malfunctions. A disco American flag suddenly (and very noticeably) drooped of its own accord. A board on wheels wouldn’t swivel and got stuck. Surjadinata sings the wrong name in a song. The two never lost composure. Interspersed in the play’s wild plot, these hiccups only made the audience laugh harder, multiplying the hilarity rather than detracting from the quality of the show. Perhaps the effect would have been different if they’d given up, but Hinch and Surjadinata’s performance was a testament to the phrase, “The show must go on.”

If you’re curious what Darth Vader’s role in all this is, if you like good acting-music-and-3D-glasses, if you’re looking to laugh out loud, if you need to remind yourself what the three steps to taking care of sea monkeys are, or if (like me) you’ve never had the opportunity to own sea monkeys as pets, I highly encourage you to catch this inventive and energetic duo. Go see this show!