Ihtsi-pai-tapi-yopa: treads firmly on the spirit side 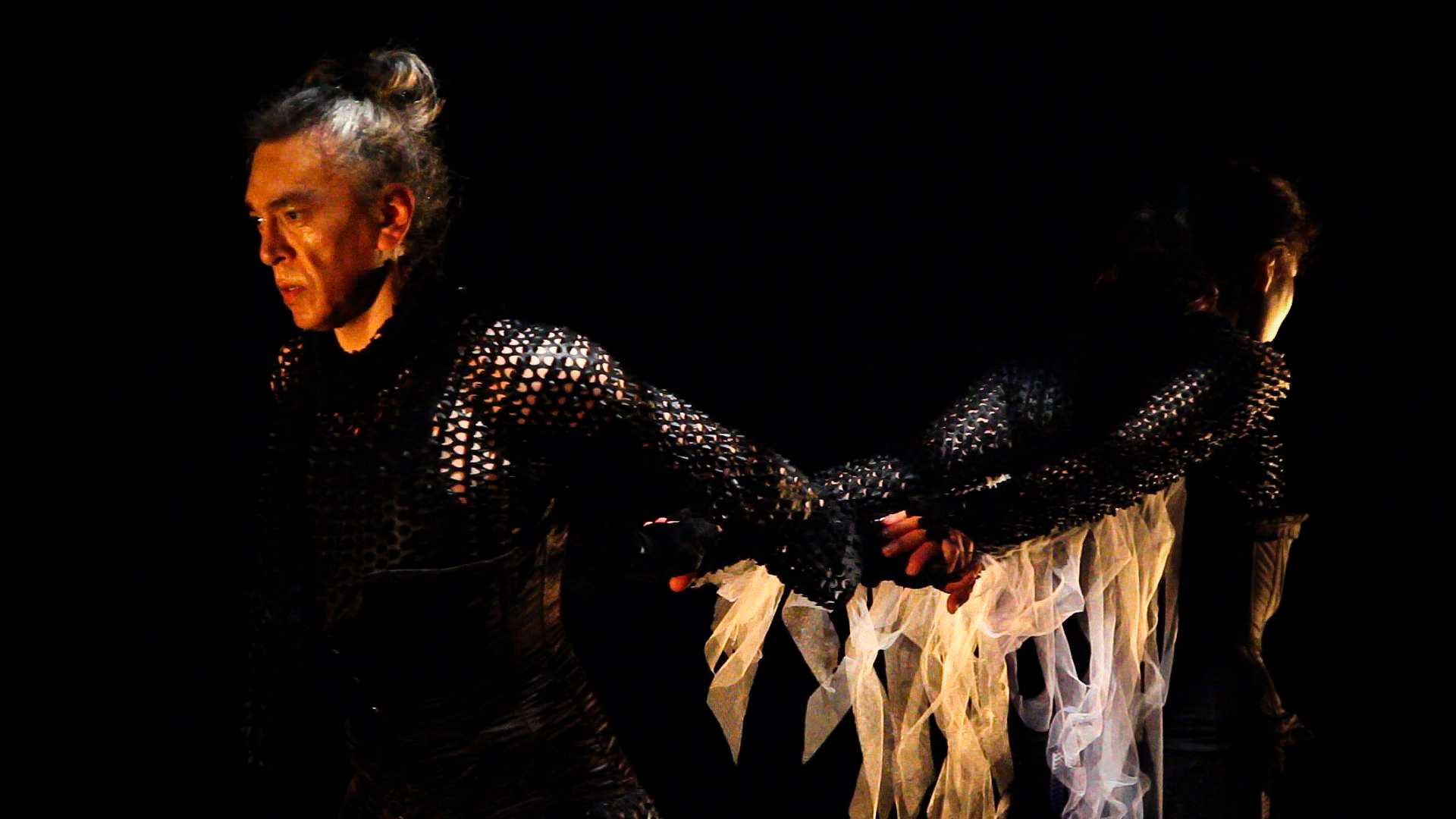 Ihtsi-pai-tapi-yopa—Essence of Life— by Coyote Arts Percussive Performance Association (CAPPA), brings story and movement from the Blackfoot-Blood-Kanai culture to the contemporary dance stage.  Using lights and background video (Craig Alfredson), a soundscape ranging from bear growls to night-club beats (Sandy Scofield), and the strong, often animal-inspired movements of the three male dancers, the piece tells of bird men who become lost and full of conflict in an urban landscape, but are guided to a renewed sense of balance by a bear spirit.  The story they tell of urban stress and the presence of an intervening, powerful, ultimately benevolent nature spirit—of separation and the need for connection to nature—is important for our contemporary world.  The work is also significant in that CAPPA’s creative process involves consultation with Blackfoot elders.  If there is a continuum between dance as entertainment and dance as food for the spirit, this piece treads firmly on the spirit side.

In the opening image a black-clad figure, its white pin feathers barely illuminated by black light, hovers as the floor seems to blow beneath it.  It is flying.  This magical opening image eventually clarifies to reveal two men with black wings and white faces, their powerful arms and backs molded into black corsets and netted tunics.   These bird men move in harmony, while sound and video convey an atmosphere of spiritual and natural attunement.  Soon the images and soundscape become more urban, the dancers more at odds. As the initial connection to the natural world becomes attenuated, the rhythm goes wrong.  It is not their rhythm.  This wrong rhythm creates so much conflict that they eventually collapse.  A third dancer, who enters from the audience, is more of a bear spirit. He joins the bird men and stops their fighting, redirecting them at key moments.  They learn bear movements as well. My favorite part of the dance is when the bear spirit becomes a bear, moving with heavy shoulders and head, while the soundtrack roars and the background shows a dark bear shape stalking the theatre.  The dancers eventually move into bubble spotlights (one or several), bouncing to club electronica.  Even in the nightclub, the bear is watching. Finally, the space becomes more healing.

I hope I got that right.  After seeing the piece once, and lacking knowledge of the Blackfoot/Blood-Kanai culture from which CAPPA draws, I think that I probably missed allusions or shorthand in the music, movement, or images, and that in this sense I am far from an ideal reviewer of this piece.  Nevertheless, the dancing of significant stories is a boon, and I am grateful for the sharing of aboriginal culture in the contemporary dance context.  The message that even in the midst of urban conflict and loss, “mother-earth/conscious-earth” is there and caring about humans, is extremely appealing.

Still, I wondered if the piece could possibly have done more to give the audience the experience that it was portraying the dancers as having. The piece portrayed the dancers as having an experience of rebalancing, but for some reason as an audience member I did not quite have that feeling of connection or recognition.  Or rather, I felt it, but I wanted more.

Maybe this is the danger of engaging with such significant themes and such basically powerful narratives: the audience says, you show me a bear spirit?  Then make my hair stand up!  Whereas in some settings the audience could potentially have been more implicated, the fourth wall in this performance kept the audience safe.  Or maybe it was something about the sound score, which included a lot of electronica and seemed largely divorced from the resonance of material bodies—although I also think that this was part of the story (since the bear spirit pulled out a kind of flute at the end and, finally, the music came from breath).  In any case, I felt a tension between the production techniques and the sense of presence and connection that I wanted from this piece.

Initially, I thought I would base this review around a distinction between narrative dance (as in a nineteenth century ballet, which tells a story salted with displays of skill) and “shamanic” dance, which I would define as making something happen in the here-and-now: not telling a story that is past, but invoking a present reality that is transformative.  But as I tried to write about this I realized that “shamanic” dance (in my definition) is also narrative, and narratives also make something happen.  In the end, the piece was thought-provoking and it did make something happen for me: it evoked in me a desire for an even greater sense of physical and spiritual presence and connection to other beings and to nature.