I Forgot to Fly Today — Balloons and Feelings 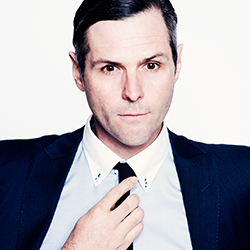 Better known from past shows as Birdmann, Trent Baumann is back this year as himself in a cloudy, sky-blue suit. It’s hard to see this as a departure from past performances—Birdmann’s distinctive style of carefully choreographed foppishness and anti-humour mixed with self-reflection and true physical virtuosity is very much preserved (along with a couple of his gags). The new performance builds on this underlying formula with a standout new segment (which I won’t give away) and an aesthetic direction that aims to be a deeper and more sombre reflection on life, the universe, and everything.

At one point, Baumann shows off his juggling skills with three wadded-up balls of paper. He stands up from his ‘desk’ (at a ‘milk-crate accountancy’) and wows us with his dexterity. On the third go, all three balls are poised to fall to the ground around him—but before they can, he turns on his heels and returns to his desk. “Back to work,” he says.

This bit works on two levels. On the one hand, it shows off the extent of his rehearsal, that he can set himself up for failure and move on to the next beat just as that failure makes itself evident. This is the real trick behind anti-humour: to be so good at something that you can do it badly in exactly the way that you intend. This has a very charming effect when done well and is very much at the core of Baumann’s performative style. (It is also what makes him something of an acquired taste.)

The second level is an artistic one: how many times have we all broken from routine when we discovered an unexpected skill of ours, and then immediately given up when we realized it would take hard work to develop? That’s what made this simple, understated bit hit home for me and put it among the most memorable of the show.

Unfortunately, there are other times when I Forgot to Fly Today’s anti-comedy doesn’t work quite as well. For example: the show involves many creative uses for milk crates. Baumann shuffles them about throughout the show to adapt them for particular uses, and toward the end, he begins to fumble with them more and more. This may very well have been an intentional effect—after all, the show deals with paths not traveled, with fading potential, with beginnings and endings and accepting the finitude of life—but I wasn’t sure enough that it actually was ‘part of the show’ to enjoy it. Part of this may have been because the ground was uneven (the performance occurs outside, on the grass). In these less controlled conditions, it’s a little harder to make the planned fumbles stand out from the unplanned hiccups.

The show has some nice audience participation and a very moving mixture of whimsy and melancholy. It may have worked better in an indoor venue (I understand that the show didn’t make it past the Fringe’s random lottery this year, so the crew had to defy the odds and make their own preparations in order to bring it to the festival), but it is a no less unique and high-quality experience. Kudos to stage manager Sachie Mikawa for contributing something lovely to the feel of the show despite not being on “stage.”