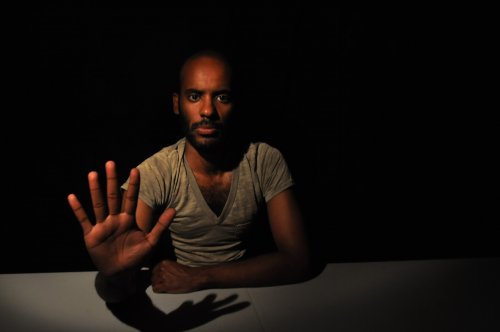 This was on the cover of the Toronto Sun

Dave: Despite our industry being constantly underfunded and in many cases struggling to find audience amid all of the summer options this city has to offer, every so often a show manages to get mainstream media attention. The scale of that attention for Catherine Frid’s Homegrown (on as part of SummerWorks) is almost unfathomable.

As you’ve likely read by now the piece explores the relationship that develops between the playwright herself (as played by Shannon Perreault) and Shareef (Lwam Ghebrehariat) one of the members of the Toronto 18. Other characters for the most part play foils to offer opposing viewpoints and provide opportunity for us, as an audience, to hear the details of the events leading up to Shareef’s arrest. But the piece feels a bit too on-the-nose. Though the politics of race are compelling and rather important points are made about the North American relationship to people of colour (“even chopping wood is a terrorist act when brown people do it”), the piece must still function as a play first and foremost. Problems lie with Greg (Keith Barker), Cate’s boyfriend. Though he brings up some salient points about her obsession, his character feels too much like a device and not a person – it’s hard to fight alongside for the relationship’s survival. Cate herself feels overly naïve, and though we’re told this is a true story, it’s hard to overcome that.

Despite some of the performances being a bit over-the-top, director Beatriz Pizano brings beautiful synchronized movement to the piece, offering a freshness and theatricality to the naturalistic piece and Frid’s writing is not without its shining moments (“I’d like to marry a younger version of you.”).  Ultimately to have such current and topical theatre happening on Toronto stages is exciting and all of the media attention (for better or for worse) will only serve to bring more attention to the case and to the development of Frid’s writing itself.

Justin: I think Dave has pretty much nailed the merits and weaknesses of the piece from a theatrical standpoint, although I’m going to enter a minefield here and briefly address (one could likely write a full essay about the story behind this play if one wanted to) some of the points of criticism leveled against the work and its creators. What one needs to understand is Homegrown is not a glorification of the Toronto 18 as a whole (sorry Harper), nor is it a justification of their motives. In fact Homegrown skirts many of the meatier and more profound issues surrounding terrorism - which, in my opinion, is one of its weaknesses. Instead it plays out like a legal drama, holding Shareef up as an example of a victim of a deeply flawed legal system and dangerously broad laws.

Homegrown makes several revelatory and compelling arguments against Canada’s terrorism act, and validly questions the reliability of one of key witnesses against Shareef, as well as the way in which the Toronto 18 were handled while awaiting trial. These points stuck with me, and I do feel as though I came out of the theatre with a keener sense of how certain principles Canadians tend to hold dear are eroding.

So why did I still feel as though the piece was deeply flawed? Well the play is not just about Canada's legal system, it is about a real life individual, and this individual did participate in a bomb plot (a point openly reaffirmed by the play). Although you can parse the word “terrorist”, shake your fist at procedural delays, and rail against Draconian anti-terrorist laws, the fact remains that Shareef Abdelhaleem is not Rubin Carter or David Milgaard. Legal minds may find Shareef’s story infuriating for all the reasons previously mentioned, but for the layman the moral math of his conviction is somewhat more simple and certainly does not err on Shareef’s side. Homegrown is a story of a major hiccup of justice, not a miscarriage of justice, and that differentiation makes the never ceasing tone of outrage in the play feel over the top.

I read an article about Homegrown in the Toronto Star today and almost tore my hair out in frustration when I discovered that playwright Catherine Frid had at one point taken her real life conversations with Shareef and attempted to translate them into a more fictional play - a move which in my opinion would have allowed her a lot more creative freedom and avoided a great deal of the vitriol launched against her - but decided to revert back to the true story format. It’s one thing to write a play exploring difficult themes, but bring a real life and contemporary example into the mix and the burden on the playwright increases dramatically - and in this case Frid was obviously not able to check her more than apparent personal bias at the door resulting in a transparently softball treatment. Does a play lose credibility when a clearly complex character has his edges smoothed out to the point of cuddliness (the attention paid to Shareef’s affection for his cats is almost excessive) or is given a free pass on many a lingering question by a seemingly apologist playwright? Absolutely.

Perhaps the greatest tragedy here is that a more or less average play has attracted so much attention when there are superior works and superior artists participating in the Summerworks festival who deserve more of the spotlight. I’ve certainly learned from Homegrown and you can expect my new musical ‘Robert Picton: He Seemed Nice Enough When I Talked to Him’ at next year’s festival.

Homegrown is on as part of this year's SummerWorks Festival. For more information on the production go here.