History: Deleted Scenes and Extras: a shudder and a smile 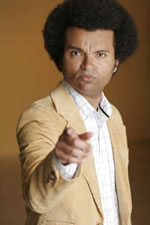 Seguin appeals to your book smarts

Victoria: Having won over last year’s audiences, Nile Séguin comes out of the dartboard nook and onto the stage with a friendly stand-up act about genocide and racism . . . but with surprisingly good taste. History: Deleted Scenes and Extras takes you from Rwanda to Auschwitz with a shudder and a smile.

First, the venue itself deserves a mention. Though much better than a dartboard nook, the stage at Paul’s Motor Inn is made for musicians more than it is for performers. Right in front of the stage sits the bar, so while the cash register has the best seat in the house, the audience has to scratch their heads and rearrange their seats before they get a good view. On the bright side, the lounge is happy to feed and water you before the show begins. There’s even plenty of beer (of course). What other Fringe venue offers that?

Not that you’ll need beer to enjoy Séguin’s show, mind you. His comedy appeals to your book smarts and rewards you for reading Guns, Germs and Steel. Séguin leaps from century to century and atrocity to atrocity, calling out the villains but wasting little time on easy targets. (George W. Bush is merely a footnote.) Instead, the audience plunges headfirst into the legal loopholes of genocide, the laughable logic of conspiracy theory and the heated postwar debate over whether Auschwitz needed a holocaust memorial or a shopping mall.

Sure the jokes are audacious, but they’re all maddeningly true. It’s no surprise that Séguin confesses to being a little paranoid.

Thankfully, things never turn academic or preachy. Absurd little truths approach comedic critical mass until Séguin—a master of hyperbole—cheerfully implodes them like so many American financial companies. (“I fucked up!” he proudly announces on behalf of billion-dollar bailout recipients, “now everything’s gonna be really expensive!”) Things are just smart enough to reveal the little insanities of the past and present, but always stay commonsensical and mercifully free of politics. A few dips into seriousness make refreshing breaks from the brisk pace of the monologue.

Material aside, Séguin himself is an ideal court jester. Sincere and sarcastic but always confident on stage. Sadly, the aforementioned awkward seating dampens his stage presence; it’s difficult to perform for the wings and the back of the house. People used to the action of theatre may also want a little more physical activity out of Séguin, since he’s a touch reserved with his gestures.

All in all, though, History: Deleted Scenes and Extras needs little more than a few flourishes and better seating—and you can expect the flourishes to show up by the weekend. So, dear fringer, here’s what to do: watch a day of plays, like you normally would—just make sure to take in something somber and political for best results. Then, after your fill of tragedy and drama, get to the lounge, grab a cold drink and watch as Nile Séguin makes our sick, mixed-up world joyously, riotously funny again.