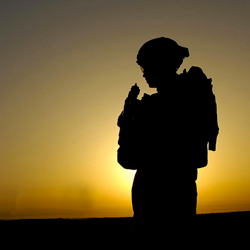 Kirsty Provan’s He Roars treads familiar territory with its portrayal of journalist Rose’s (Kirsty Provan) struggle as she pursues a relationship with her childhood friend Charlie (Sebastian Kroon) who is a soldier in the Canadian Armed Forces. The play charts their romance between Charlie’s tours of duty in Afghanistan while also showing us occasional glimpses of their childhood friendship. Director Laura McLean’s largely abstract staging, which is required to prevent the play’s frequent time lapses from dragging the pace to a crawl, is often somewhat clunky and awkward, lacking the grace and poetry that would make it an effective stylistic choice. Kroon and Provan began the play with a sense of unnerving haste and a palpable lack of chemistry, but once they settled into the show, their connection strengthened and in addition to dispelling the hastiness, they portrayed teasing flirtation without being overly ‘cutesy’. They explored the joy and anguish of youthful love without straying into melodrama.

The greatest accomplishment of He Roars is that it manages to address the realities and struggles of life with a soldier without relying on the hackneyed clichés that often define war dramas. While acknowledging its dangers, the play recognizes the military as a legitimate career and ambition, not reducing it to foolhardy thrill-seeking or misguided patriotism. Rather than the archetypal (and frankly pathetic) histrionic wife, waiting at home, worrying about her man, Rose is characterized as supportive of Charlie’s goals, and far too busy with her own career to spend her days waiting for the phone to ring with The Call You Hope Never To Get. Even the requisite PTSD Nightmare scene is wonderfully grounded, conveying the psychological toll Charlie’s job takes on him and on Rose without any unnecessary, operatic outbursts of fear and worry.

There are, however, a few moments where the play slips into self-indulgence, such as in a drippingly sentimental dance between Rose and Charlie or a torture scene which is so overplayed as to be almost comical. Some of the most rewarding moments are the flashbacks to Rose and Charlie as children. Provan and Kroon both perfectly capture the unique vocal and physical qualities, and more importantly the stunning emotional honesty of young children. These scenes also elevate the writing, adding a great deal of poignancy by their contrast to the rest of the play, as well as by establishing the running references to C.S. Lewis’ Chronicles of Narnia, which is used to great poetic effect in the adult scenes. And in the play’s final scene, the two timelines find an intersection that makes a gut-wrenching metaphorical statement. Though the writing, performances, and staging all falter occasionally, He Roars is a refreshing and sometimes powerful departure from the often trite war drama genre.