Happiness (TM) – Smile and the Fringe Smiles With You 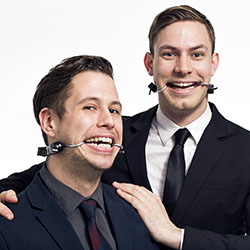 Can happiness be trademarked? Can two guys looking for happiness, prosperity and luxury get along? Can they really do 500 pushups?

The situation is this. We're witnessing the launch and behind-the-scenes rehearsal for not one, not two, but three new HPL(TM) products designed for your consumer pleasure. At a price, you can be happy. Yes, you!

Tony Adams and Cory Thibert are of the Fringey high-energy duo style. Verbal and physical pacing play off each other from the start with the, “We're so happy you're here” handshakes of the audience to the final (rather absurd—in a good way) scene. In the meantime, they might well break into dance or 500 push-ups (or was that 40?) at any time.

Fresh, or rather not-so-fresh, from Thunder Bay and Moose Jaw, where they disappointed themselves and each other, they're now trying hard to outdo the Scandinavian team in sales of the new products.

It's a fun little stab at the industry behind folks like Tony Robbins whose website tells you that, "Walking over those hot coals is a symbolic experience that proves if you can make it through the fire, you can make it through anything."  But you can also find stories such as “30 treated for minor burns in Dallas” from this past June.

Peter and James are, appropriately enough for the story line, somewhat scaled down versions of Robbins not just in height (Google tells me that Robbins is 6' 7”) but also in general life success (Robbins is the No. 1 Life Coach in America and happily married to Sage.) Seriously. But Peter and James' lives aren't going so well in spite of their efforts to live their message.

While the HPL(TM) Happy Hookup product looks somewhat uncomfortable (and silly), consumers would not find themselves in the emergency room with burns.

For those of us who are suspicious of bright, shiny things/people, we are pleased but not surprised to find out that Peter and James are not all that happy. An obvious assumption perhaps, but it's hard to find anything that would lead us to believe that Robbins experiences anything close to sadness let alone existential angst.

In terms of the script, I liked the bits best when it edged over to the absurd side. When they are trying (very hard) to visualize the most successful launch ever, they accidentally head into a ridiculous scenario.  (I won't spoil the surprise but I still chuckle when I think of it.) Personally I'd like more absurdity.

To me, it was as much as anything a glance at male-bonding (or not). They try so hard to buoy each other up but then sink repeatedly to being negatively competitive and critical of each other as their own stress level rises and they sense disaster on the horizon.

I can't imagine this script with two female characters. Although it might be interesting to ask the May Can Theatre group to dream up a version 2 for Oprah-style feminine-energy.

Are you wondering if you're happy enough? Go to happinesstm.ca and find out.

Could it be tighter? Yep, I think so. For starters I think one HPL (TM) product is enough. The happiness hook-up featured on their advertising is enough already. The other two products are barely mentioned and just not that funny so maybe we don't need them at all.  I'd also like to see a more creative and luxurious product display unit for it.

I felt that some references were overdone. OK we get it that Moose Jaw and Thunder Bay kind of bombed and that Vancouver is, therefore, *really* important and stressful.

Nothing here that would offend your parents, so take them.

May Can Theatre which includes Madeline Boyes-Manseau is well worth watching to see what they're up to next.