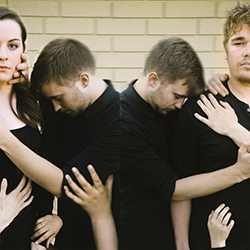 Hands Around by Arthur Schnitzler, translated by A. Koren, adapted by Dylan Coulter, is disturbing because, though first read aloud in 1900, it is relevant today in its far too realistic account of the messy, gory, sinister assortment that is love.

Set in 1980, Vienna, the story follows ten individuals as they power-play each other in the name of love. As Hands Around progresses, lips are kissed, promises are broken and betrayal becomes expected. There is not simply one perspective of love. One man believes that "all men, really, become disgusted by love." A married man admits to his wife that "one cannot always be in love" while another doesn't believe in happiness at all. Through these interactions, different facets of love surface. Some characters are reckless with others' hearts, using them as mere playthings because they are bored. Some pine desperately over the unavailable, wretched with unrequited love. What becomes clear is that those in love hurt, and get hurt; no one is innocent here.

Schnitzler explores human sexual behaviour through pre- and postcoital conversations, his characters are prone to deception as well as vulnerability, indifference as well as devotion. As each new character introduced is given a new pairing, the way they give and take love differs. Each characters' approach to sex is not always consistent either. The actors and actresses brilliantly depict their double-sided dispositions, causing doubt in which portrayal is the closest to truth. They explore the greys of love.

"In a certain way, I've already forgotten you," one candid lover expresses before sex. The lights dim, the scene shifts, and a new couple is found at the centre of the stage. Hands Around forces you to doubt the love you see on stage, and then question the tangible love you have in your own life.

Only a disquieting, authentic kind of play can create such incredulity in its audience. You will find yourself wrapped up in knots, perhaps sickened by the actions you've observed, yet you will be desperate for the end.  What do these lovers find? True love? False love? Stagnancy? Heartbreak? Are they an accurate representation of you? Are you doomed to repeat their mistakes?

"I've just given you everything," a once dominant, saucy woman states dejectedly after sex. The response is not what she'd hoped for and, again, the tables are turned. Watch eagerly as each character is hooked by another. Hands Around cautions on flirty affairs, for they will simply warp, lust and desire will vanish, and your mangled heart will be all that remains.