GRIMM too: this ain’t your daddy’s Disney 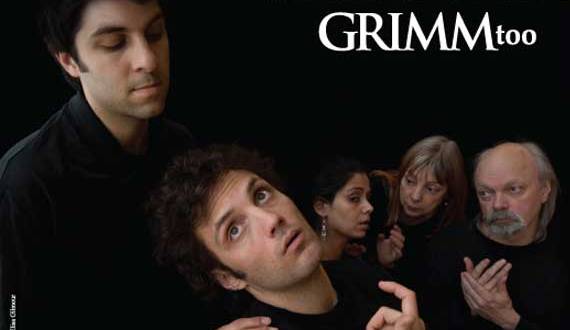 Theatre Smith-Gilmour continues their 30th anniversary season with GRIMM too, a staging of ten of the Brothers Grimm more obscure fairy tales.

A collection of five actors – including company founders Dean Gilmour and Michele Smith – present the stories on an empty stage, using their bodies, voices, and only a handful of props to paint the vivid, dark stories collected by the eponymous godfathers of bedtime stories in the 19th Century.

Smith-Gilmour eschewed the two most popular methods for presenting Grimmean tales to modern audiences: either giving them the Disney treatment by glossing over darker elements and focusing on happy endings, or indulging in tongue-in-cheek revisionism to make the stories more palatable. Instead GRIMM too presents the tales completely intact, flaws and all.

Everyone knows the original tales from the Grimm playbook were fraught with violence, with punishments often greatly outweighing crimes. Smith-Gilmour held nothing back in exploring the darker elements of the tales (I never thought I’d need the term ‘hedgehog rape’ in my vocabulary), but also were unapologetic about the unusual narrative structure in many of the fables. In The Willful Child a petulant child’s tantrums continue into death, forcing an exasperated mother to beat her zombie-child back into the ground with a stick; not something the boys at the House of Mouse could easily set music to.

The selection of several of the more obscure – and bizarre – tales pays off, allowing Smith-Gilmour to present centuries-old material without fear of repetition. We’ve all seen Cinderella in every incarnation imaginable, but there’s no need to infuse fresh novelty into Jorinde and Joringel. Each tale is presented with beautiful earnestness, the sort you don’t find in performed fairy tales outside of a five year old’s birthday party. It’s as though the children’s tales were being performed for children – in the middle ages, when such material was considered fit for young ears and eyes.

The performers cycle through an entire roster of characters, be they animal, vegetable or mineral, with only slight costume changes and body language. They morph from an entire menagerie of caged birds to a towering cathedral with perfect ease, using generous doses of pantomime to tell the story in lieu of heavy narration. In one instance Pragna Desai transforms from a block of marble into an elegant statue in an impressive display of gesture and movement, while Adam Paolozza’s voice mimicry make his mimed violin seem eerily real.

The show’s absolute highlight was a staging of The Moon, in which three scoundrels steal the moon for their own purposes, and after taking it to their graves, cause all the undead to rise from eternal sleep due to the underworld’s new light. The story is told in total darkness, with the only source of light being the desk lamp representing the moon. With the lamp swung, hidden and repositioned throughout the story, the performers use chiaroscuro to full effect. Easily one of the most creative bits of stagecraft I’ve seen in some time, despite leaving the occasional spots in my vision.

GRIMM too certainly made me wish I’d seen more from Theatre Smith-Gilmour during their thirty year run, but I’ll settle for keeping an eye out for future projects in their repertoire. Partway through the performance Dean Gilmour teases the audience by asking; “Have we lied enough? Shall we lie some more?” Personally, I look forward to many more lies of this caliber.