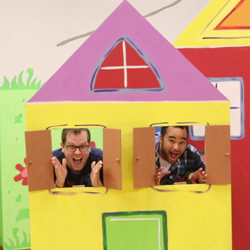 A collaborative project by Blackjacq Productions and Clockwork Theatre, The Green Room Theatre Project selects nine youth who get the chance to work with professional artists learning the entire process of creating a theatrical production. The Green Room Presents… is a devised play which is the culmination and final showcase of the program.  Created and performed by amateur youth artists, the show is far from professional quality theatre, but it has its share of shining moments.

The theme of the show is growing up, and it opens with a vocal montage of moments throughout a single life, from a crying baby to an old man, a surprisingly innovative and thoroughly engaging start. The rest of the show alternates between vignettes varying in genre, length, and period, and the youth performing short, autobiographical monologues. Although it’s clear to see how these two halves are connected to the theme, there is very little attempt to tie them to each other in any meaningful way.

The tone of the vignettes swings wildly from one to the next, displaying an impressive range, from straight farce to heartfelt drama and any number of others, with some scenes significantly stronger than others.

Highlights include a scene in which a high school class are being condescendingly taught how to cross the street by a crude, foulmouthed, impatient, and apparently unstable police officer. The scene, while at times somewhat obvious in its humour, is also hysterically funny.

A scene set in the early 20th century about a young couple coping with the departure of a mutual friend with whom it seems they were romantically involved is an unexpectedly insightful piece of drama. With two excellent performances and lyrical dialogue, this scene demonstrates the potential depth of artistry that is waiting to be unleashed among the young creators.

Although not all the vignettes are as theatrically sound as those two, they are consistently engaging to watch due to the reckless energy of the young cast, whose untrained, showy performance style is oddly satisfying, as well as a few scattered moments of real grace in the storytelling and explosions of power in the performances. There’s also a refreshing lack of censorship on the part of the program facilitators, who have allowed these young artists to flex their creativity without filtering coarse language or dark subject matter (either comic or tragic,) allowing for more honesty in the work. The Green Room Presents… is mostly an experiment, and though it lacks polish, some of it is a lot of fun to watch.