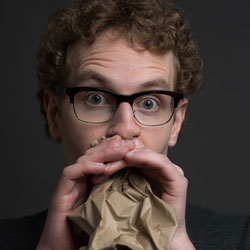 Sam S Mullins’ solo performance Grandma’s Dead is fairly typical Fringe fare: a dramedy solo play where a single actor plays a variety of characters. Unfortunately, this particular example falls a bit short of the form’s potential. The concept is an interesting one. Sam gets a call from his brother Chad informing him that their Grandmother has died, and that they have to drive from Vancouver to middle-of-nowhere Saskatchewan so that someone from the family can see her burial. Presumably, as the two brothers make their way across the country, they will rediscover their lost relationship and get caught up in a few shenanigans along the way. The second half of that equation is definitely present. From an incident with a deer, to an encounter with a bee (Chad is deathly allergic), to a night’s stay in a T-Rex shaped hotel in Drumheller, the cross country adventure is full of delightful, oddball escapades.

One of the high points of the show is the aforementioned deer incident, which features several minutes of Mullins alternating between the brothers in the car, and a hysterical portrayal of a prancing deer, leading up to the inevitable climax of such a combination, which is excellently played to full comic effect. In addition to the deer, there are some great laugh out loud moments, though they sometimes rely on obvious bits and punchlines that you can see coming from the far end of the prairies that the brothers are traversing.

Overall, the show is not quite funny enough to justify itself as a straight piece of comedy entertainment, because in between the major comic sequences are scenes of ‘brotherly bonding,’ meant to fulfill the ‘drame’ half of the dramedy genre. But these scenes only skim the surface of the brothers’ relationship, touching on the universal issues of siblings: not having the same interests, the older sibling being a bit of a bully when they were younger, losing touch after moving away from home, etc, without really exploring with any specificity the dramatic potential of these two characters and their history. When they return home at the end of the trip, Chad hopes that they might stay in touch more, but we haven’t really seen any transformation in the characters to prompt such a declaration, or at least not to give it any kind of weight.

As a performer, Mullins does an excellent job of differentiating his physical and vocal characterizations as Sam and Chad, as well as the several other briefly appearing characters (the oddball concierge at the T-Rex Hotel is thoroughly entertaining), and his Deer is spot-on hilarious. He does seem to occasionally be stumbling over the text, though it’s not clear whether this is a deliberate character choice or a lack of polish. Grandma’s Dead has some moments of truly inspired comedy, but the dramatic core of the story isn’t fully realized.