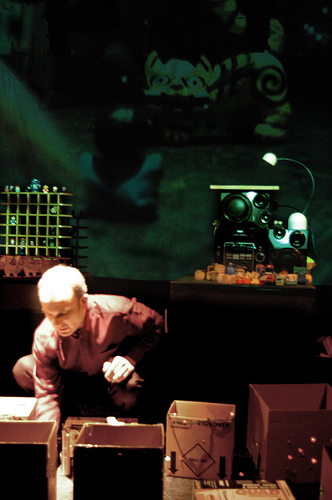 Grandma Noda’s Tigers, currently on as part of Victoria's Uno Fest, is one of those special little shows where everything seems to work supernaturally well. Never before have I seen a house so full on a pay-what-you-can opening night. Actor/writer Chris Little (who co-wrote the show from his wife Regina Fitzgerald’s first draft) seemed pleased with this, too – and quite deservedly.

The “family friendly” label is accurate, but it also might be selling the show short. If you’re out renting movies, “family friendly” usually signals something thematically harmless, perpetually upbeat and wholly uninteresting for anyone twelve and up. Not the case with Grandma Noda. The plot is simple enough for kids to understand and grown-ups will anticipate a few of its major turns, but the whole production has a tone of genuine play about it that is nothing short of fascinating to watch. The obvious whimsy of the set pieces and props – neon colored toy cars, Christmas lights, a horde inch-high puppets and a prowl of wooden tigers – belies the foresight that goes into planning it. If you’ve ever seen the purpose, gravity and enthusiasm of little boys improvising a skirmish with army men, inventing a world from scratch, you’ll have a sense of the feeling Chris Little has so expertly refined.

The story itself belongs to Hiro, a landlord and stereo store owner who wants to bulldoze his Grandmother’s nearby cottage for – what else? – a parking lot. In his defense, Hiro is in desperate need of parking (several fender benders occur). Accompanying Hiro are the sweet-potato salesman, whose produce feeds the titular tigers, and his trusty shipping and moving staff. By virtue of being inch-high wooden puppets, Hiro and company are all talented acrobats and nigh-invulnerable – precisely the kind of people you want around when there are imaginary tigers to catch.

Accompanying Grandma Noda? Her noble, jacket-attacking dog – who, by the way, is made from a feather duster.

Dialogue is simple, but even then lapses back and forth from English to Japanese. A bonus if you’re bilingual, of course, but the audience never really gets lost. If anything, it focuses our attention right where it needs to be, on Chris Little and his tiny cast. The cozy space of the Intrepid Theatre Club is perfect for this. Little makes sure to keep topping his puppetry as the show progresses, from clever stereo equipment stunts to a puppet’s-eye-view chase through the streets so innovative the audience could not stifle their “oohs” and “ahhs.”

That really ought to sell the show right there. It’s rare for theatre to leave an audience with such a genuine sense of wonder, at least not without a Broadway-sized cast and Broadway-sized budget. Grandma Noda’s Tigers pulls it off with almost the opposite: a single actor and a set made of everyday objects. It brims with surprises, a quality that’ll earn anyone’s applause, kid or otherwise. It shows two more times: Saturday and Sunday the 22nd and 23rd, both at 6:30pm. Oh, and if you’d like, Little is more than happy to show you his puppets up close after the lights come up and the set gets changed over for Japanglish. Just in case your curiosity gets the better of you – and it should.

Grandma Noda’s Tigers, part of this year's Uno Fest is on at the Intrepid Theatre Club. For more information go here.