A Freudian Slip of the Jung: loses its meaning 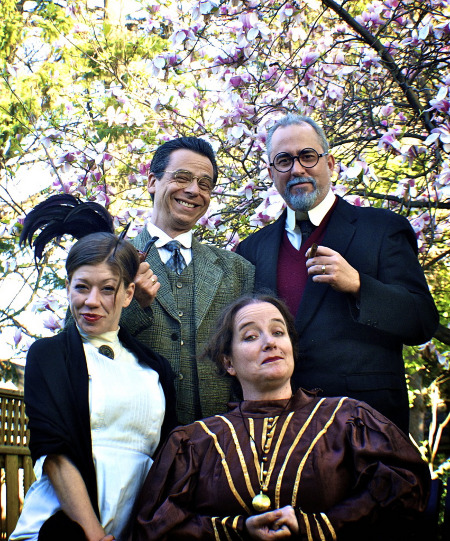 Two purely positive traits cling to A Freudian Slip of the Jung: A true comedy. 1. A four-person cast carries the show with unfailing energy. 2. The title is clear and descriptive. Those are the best things that can be said about this comedy by Sean Fisher.

The show’s tagline gives away its peak: “In 1907, Carl Jung met Sigmund Freud, and the unconscious mind has never been the same since.” Jung is the narrator, speaking to the audience as the collective unconscious. Right off the bat, the joke dies for anyone who doesn’t know Jung’s theory that each individual draws on the experience of all humanity, collected in a reservoir of memory that we stream subconsciously. Assumably, nearly everyone knows at least something of Freud’s teachings that sexual desire is at the base of all human instincts. At least, that’s what Fisher and director Bruce Hunter count on to perk interest.

A Freudian Slip is cheap laughs at every turn, while all possible sexual pairs have their moment.  Then suddenly, Jung’s final speech presents an attempt at human insight. I won’t give away that one offering; suffice it to say, it’s about as original as what came before.

A Freudian Slip of the Jung: A true comedy continues at Royal St George until July 10 as part of the Toronto Fringe Festival for more information, go here.