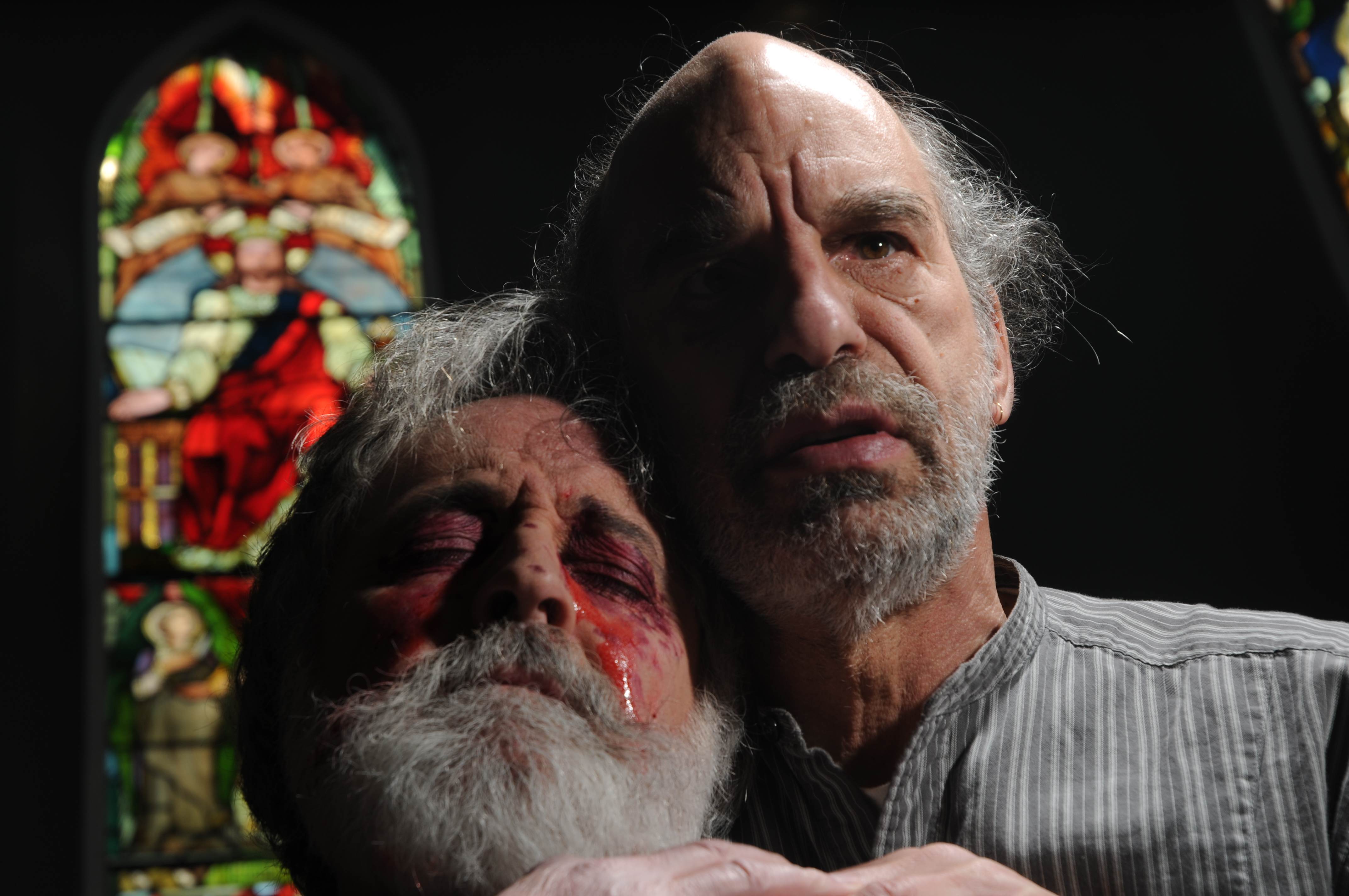 I am so glad that City Stage New West exists. As a resident of Kitsilano, it’s a schlep to get out there. But it’s worth it. Renee Bucciarelli and her team are passionate about building the theatre community and creating good work. I think that’s admirable.

The concert reading of King Lear I attended on April 22nd was part of the “Enduring Age/Enduring Youth” program City Stage New West is exploring. Both this and Queen Lear earlier this year are perfect choices for a production that brings emerging and established artists together.

Regrettably there was only one performance (as is the way with readings) and that is practical and exciting in its own way. The cast was complete and in the same room for the first time, well, ever. And pulling off a production like this without rehearsing even just entrances and exits together is impressive. But of course there are down sides too. With so little rehearsal, there is no time to build relationships and only so much research you can do into the nuances of your character without a human being to play against. Some performances were better than others. Some disappointed and some amazed. But overall it was a strong production, with some really neat little directorial moments which don’t happen too often in staged readings.

Seeing a performance of your favourite play is a bitter sweet experience. There are always things you wish were done differently and actors who don’t suit your idea of what a character is like. But there are also those beautiful moments when an actor discovers facets of a character or story that you throught you knew inside out. This production had a bit column A and a bit of column B for me.

The two shining stars in my opinion were John Voth as Edgar and Frances Kitson as the Fool. I would especially like to mention that I’ve never really taken to Edgar, I always thought he was a bit wet around the ears and not very interesting. But Voth imbued Edgar with a mix of strength, sincerity and desperation that I just loved.

Kitson is the first joyful female Fool I have seen and she was delightful. She lightened up the whole piece without trivializing the material. Her relationship with Lear was especially interesting. I started making up a whole backstory in my head about how Gloucester has his bastard son and King Lear’s Fool is his bastard daughter. This train of thought got me all excited about the parallels between Cordelia and the Fool for me in a way that makes me want to go back and analyze the script from a different angle. Kitson seems so comfortable on stage, so natural, she brought a relevance to some of the less contemporary plot points and dialogue. Her wide-eyed, clownlike fool lent the whole production an innocence and simplicity that throws the more petty and ambitious characters into sharp relief. I also loved the interplay between the Fool and Goneril and Regan, informed as I was with my imaginings about her parentage, it became less a story about an aging monarch and more about his daughters and how they’ve learned to live with his arrogant indifference.

Speaking of comedic value, there were glimmers in Richard Newman’s Lear of a rambunctious, if spiteful, joyful in his arrogance. Like that of an angry intellectual who has decided to make his kingdom his petri dish. I don’t know if that was intentional or not, but have loved to have seen that explored. Newman’s interpretation of Lear, while intelligent, skillfully performed and obviously well-researched, felt incongrous. It’s very much a je ne sais quois kind of thing, but I felt like he hadn’t really made it his own. Newman the actor seems to have quite a forceful personality, but his Lear felt... safe. Actually, no it felt under-rehearsed, like he was only beginning to explore what his Lear would be like. And here we encounter the pitfalls of staged readings. There isn’t much to be done about it. In an ideal world I would have liked to have seen more of the sadistic, petulant teddy bear that I saw lurking in the twinkle in his eye. As it was, Newman delivered a solid, talented performance on little/no rehearsal, an admirable feat.

Russel Roberts’ Gloucester left me with a similiar impression. Perhaps my expectations for well-seasoned actors are too high, I know I am a demanding audience member. I have a profound respect for Roberts and I’ve seen a fair bit of his work. This particular performance lacked... vitality. His Gloucester did have me thinking how fickle the character is, and I saw some Polonius-isms in there that I’d never noticed before, which I found rather amusing. Like Newman, Roberts is faultless in his execution and has a voice that could read me the telephone book any time.

It was a large cast and I’m not going to go into detail with everyone. A pet peeve of mine is how contemporary the sisters can be in their spite and disdain. For some reason actresses default to this "attitude", roll their eyes, cock a hip, and OK, this was hardly period, but I feel it travializes their personal power and also, in the beginning, how justified they are in their behaviour. That said, Lilli Clark as Goneril had some beautiful strong moments.

Marc Anthony Williams had a interestingly soft interpretation of Kent. Unfortunately, since I could also hardly ever hear what he was saying, his lack of elocution made it impossible to know if it worked or not. Afshin Haidari's Edmund was more emotional than I’d ever seen him, which was interesting. I'm not sure if I liked it, but I appreciate being given something new. Haidari seems a lot more comfortable in scene work than soliliquies, but a good effort and some interesting moments.

Overall, considering how ambitious a project this was and how few resources they had, I would consider it a resounding success. The tough part about mixing emerging and professional artists, or even artists of different ages, is that the contrast prevents a cohesion of style and of production standards. Everything is in sharp relief to everything else and little things that you wouldn’t even notice in another production are thrown into full contrast.

But how will we create a community if we don’t merge? How will we learn from each other, experiment and come up with new combinations, relationships and perspectives we never had before? In some ways, only these productions can be classified as good theatre. Only when we are pushing our own limitations and taking risks as creators or audiences are we honouring art. That is the primary reason I will be following City Stage New West going forward. I believe in their vision. It is only in striving that we can create truly powerful and relevant work.