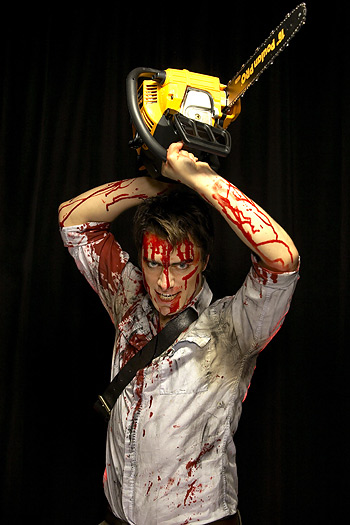 Evil Dead. Doesn't look like an amateur to me...

Just so everyone's clear: There are two versions of Evil Dead: The Musical playing in Vancouver right now.

One's a professional production by Ground Zero Theatre/Hit & Myth/Keystone which originated out of Calgary and is playing at the Vogue Theatre. You’ve probably seen the full page ads in newspapers for that one. Then there’s the other production, an “amateur” one by DSR Proudctions, that's filled with local talent and playing at the Norman Rothstein Theatre. It's a totally bizarre situation, especially as this highly anticipated musical is being touted as the new “Rocky Horror Picture Show”.

As a professional production, everyone at the Vogue is getting paid. Now, while those in the DSR production may not be getting paid as much, everyone involved has credentials similar to the “professionals” so it is reasonable to expect the talent level to be pretty much on par. Really, the only difference I can tell from afar is that the professional production has a much larger advertising budget and thus their ticket prices are almost double that of the amateur production. So if you're trying to decide which production of Evil Dead to go to, I suggest you look into your wallet and see if you've got a bunch of money you want to throw away to go to the one at the Vogue, because the DSR production of Evil Dead: The Musical fucking rules.

Now I'm only reviewing the DSR production so I can't compare the two, but I really can't see how the one at the Vogue can be that much better. For one, Scott Walters is as good as they come for a lead in a musical -- especially for a character like Ash, who needs that special bit of bravado that Bruce Campbell gives to the role in the movie. All the other characters feed off of Ash's energy and humour, and he is in control of the entire story. So if DSR has a saving grace in its battle of the Evil Dead’s, it's Walters, who has the great comedic timing - and a hell of  a voice - needed to lead them into the zombie slaughter. (There is a pun there, by the way, describing theatre in Vancouver. Just so you know.)

Mat Baker, Meghan Gardiner, Erik Gow, Ian Rozylo, Matthew Graham, and Jennifer Neumann round out a talented cast. Gardiner, especially, gets some wonderful camp comedy moments as the ditsy Shelley and also the over-bearing Annie. There were a couple opening night miscues, including an actor whispering backstage (while on microphone) to 'go through the window'. It was all part of the experience, and the audience seemed to love it because of, not in spite, of its 'amateur' budget. One of the biggest cheers in fact came from one of these miscues: when Annie wound up her axe to hit Ash, the rubber blade flew off into the crowd. The guy who caught it decided to throw it back. It really turned out to be an adventurous evening for the front row (titled the “splatter zone,” as they got doused periodically with fake blood). There weren't as many “blood” moments as I'd expected, but maybe that's what the extra $30 is for over at the Vogue. If you're looking for a quality musical, with a live band (Vogue doesn't have one), DSR at the Norman Rothstein will have your blood-stained cheeks grinning ear to ear.

The DSR version of Evil Dead: The Musical continues at the Norman Rothstein Theatre until November 7th. For more information why don't you hack your way here.

Editor's note: in the interest of fair play we did request review tickets for the Ground Zero production but their publicist never got back to us.