Edge 4: From Honeydew to Hurricanes 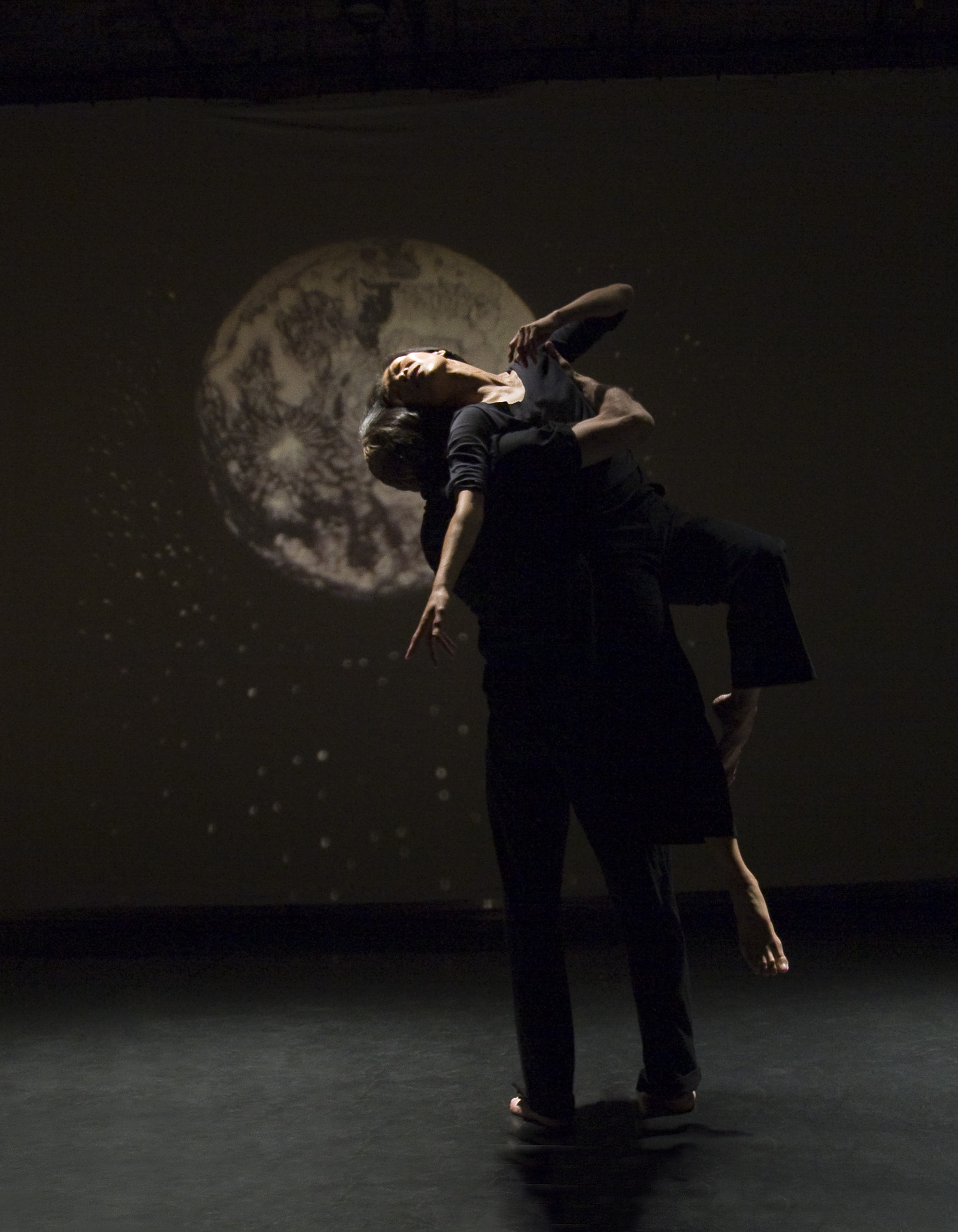 The contemporary dance duet enables unparalleled expression of intimacy between two people, while the solo often represents a quest within the self. Edge 4, consisting of a duet and two solos, delivers on the promise of these forms, and more: we learn that individuality persists in the most interconnected of couples, while the imperative to relate—to oneself, to externally-imposed ideals, or to the social and physical world—exerts itself over even the most self-contained of individuals

. “Beside Each Other” by Andrea Nann/Dreamwalker Dance, a duet performed by Nann and Brendan Wyatt to Gord Downie’s poetry and solo music, will premiere as an hour-long piece this December in Toronto; DoTE audiences enjoyed a condensed thirty-minute version consisting of five short segments that range from playful to raunchy to vulnerable to erotic. Using lyric-driven music can be risky: the audience may allow the words to script and thus limit their interpretation of the movement. Yet Nann’s engagement with Downie’s verse expands rather than narrows possibilities, as when the performance opens with a recitation of a poem comparing moon and sun to pieces of fruit. The moon projected behind her and a honeydew grasped between her fingertips like a volleyball, Nann asks an audience member, “Will you hold the sun?” At the end of the performance, the words unfold even more playfully and sensuously as Nann greets the audience at the exit with a tray of sliced melon.

Sun and moon, archetypal images of yin and yang, aptly frame this exploration of the private life between a woman and a man. Through changing moods, the movement vocabulary recurs: Nann jumps onto Wyatt and wraps her legs around his waist like a toddler greeting her father, like a lap dancer grinding her hips, like a patient needing to be carried, like a lover seeking tantric union with her soulmate.

Although both dancers inhabit the stage at all times, they do not always dialogue. The infatuated glee of the first segment transmutes into side-by-side self-assertion: while Downie growls, “We’re hard core,” the dancers stamp their feet, thrust their hips, and flex their muscles in Popeye bicep-curls. In the next scene, the backdrop suggests sunlight streaming through blinds while lovers roll around in bed, as irritated as they are comfortable with each other. The most vulnerable sequence occurs when Nann is blindfolded and Wyatt says, “I have a secret.” “Tell me.” “No.” Wyatt lifts his blindfolded partner and manipulates her with gentleness but in clear recognition of her incapacitated—and hence unequal—state. Setting her down, he then takes a solo: his secret, it appears, being his very independence, his private, inner self. Nann removes her blindfold and the two face each other in silence. Their chests hollow into C-curves that pulse in the lub-dub rhythm of the heart. When the music starts, its rhythm synchronizes with the dancers, so that we hear the percussive bass as a heartbeat. Here, the bodies lead and the music follows, and not the other way around.

“Beside Each Other” culminates in horse and rider imagery, the roles shifting between the partners. In a final tableau, Wyatt lies on his back, his legs perpendicular, feet supporting Nann’s pelvis so that she can stretch horizontal in the air. She flies and swims, then takes a handstand and melts to the floor into a lover’s embrace. The audience revels in the richness of a union expansive enough to encompass such varied roles. In their deep nonverbal communication, the pair models an ideal relationship: each dancer tenderly accepts the other’s fragility while respecting the mystery within.

In the program note for “Everything is All Right,” Edmond Kilpatrick says that in creating the solo he has aimed to “shed old patterns of movement,” to free himself to “move the way [his] body innately wants to.” Paradoxically, technique is a tool of expression that also binds it. Years of professional experience in classical ballet have shaped Kilpatrick’s movement, and the solo dramatizes the struggle to break free. Drawing on idioms from salsa and hip-hop, Kilpatrick explores his range, at times lyrical, at others staccato. As the piece opens, he stands centre stage and moves only his extremities to lively Latin guitar strumming. In one segment, he breathes sharply in and out in time with jerky movements of his head and torso, and then casts a concerned gaze downstage towards the light source. “We’ll do this together,” he mutters under his breath, revealing that the soloist is never alone; even in the absence of audience and music, space and light form necessary supports.

And this is fortunate, for a sense of ruthless self-criticism comes across as Kilpatrick’s exhales turn into sighs and groans of disappointment. Indeed, the task of breaking free proves difficult. A pitch turn that sends the torso briefly off-centre provides a welcome contrast to the dancer’s usual upright position. Otherwise, the movement rarely varies in level, without descents to the floor or ascents into the air. Revolving around centre, the choreography also makes restricted use of the stage. Yet, by the end of the piece, the dancer’s breath has relaxed, and the last audible mutter is a soothing, “That’s fine.” Kilpatrick bills this solo as “the beginning of a new journey,” and we can look forward to future works that may unleash further dimensions of this technically powerful dancer.

The title of “Hazel (1954),” as we discover, refers not so much to the apron-clad 1950s housewife that Katy Harris-McLeod seems to portray, but to a hurricane of the same name. Harris-McLeod’s piece crosses over into physical theatre with use of voice and of props—specifically, a crate that holds a model city. Early on, the performer lists dates and female names—each represented by a static gesture, many of them conventional female postures, such as the damsel in distress, the pregnant woman holding her belly, the young mother with a baby in her arms. The litany ends with Katrina, 2005 (gymnast’s V). The soloist unties her apron and removes her high-heeled pumps, but keeps her hair in a tight bun. Wearing a red dress, she tells us that “all buildings are moving constantly… nothing is dimensionally stable in a structure, which should always be thought of as a living organism.” The piece thus invites us to see buildings as animate objects, but it also humanizes storms. When the dancer ties the model city to her back, we feel the rocking of the earth and its ripple effects on the buildings. A rainstorm sounds and Harris-McLeod unties the building so that it flies out behind her as she spins. She sets it down in front of her to the crackling of fire. Donning apron and shoes once more, the performer unleashes her rage on the model city, punching and kicking it in ironic contrast to the peace-promoting lyrics: “We all need more hugging in this world.”

In the program note, Harris-McLeod admits to using a “stereotypical female character,” and the recent resurgence of this figure in theatre and in films such as Revolutionary Road needs further theorizing by cultural critics. (Is the return of the repressed housewife a nagging reminder that contemporary society hasn’t solved the problem of biological difference and gender roles?) In the meantime, the lively convergence of cultural reference points in “Hazel (1954)” demonstrates, once again, that an individual is always in conversation with forces outside herself. Harris-McLeod’s piece comments intelligently and sensitively on the ways that individuals touch and are touched by both the natural and the manmade worlds.

By Jodi Lundgren
Tags:
Edge 4 Dancing on the Edge