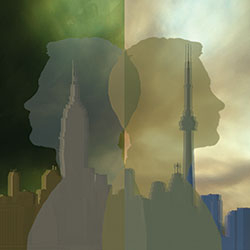 This play is a lament for the painful consequences that radiate in all directions from a violence-infused culture. It’s a reflection on frustration, anger, abandonment, hidden disabilities, and sexual violence. It reveals a struggle to understand the causes of pain across four lives: a dead American soldier, perhaps by suicide, perhaps involved in Abu Ghraib atrocities in the US/Gulf War; his wife, perhaps unloved, a young woman, now a therapist, emotionally abandoned by her father; the soldier’s artistically-inclined, identical, gay twin brother (wouldn’t they both be gay?) worrying about his life; and the father of the brothers, a Vietnam veteran suffering PTSD, who punched out the windshield of his car when his boys were with him. (Note the cover of the program guide.) All a bit confusing, but the feeling is there.

And why, for goodness sake, did Christopher Shinn call this play “Dying City”? Did he mean Baghdad? New York? “Tsunami” or “Leaving Death Culture” might have been more appropriate. It’s a story about the sins of the fathers visiting not just upon the sons but upon everyone in the vicinity. It’s reminiscent of Apocalypse Now, Who’s Afraid of Virginia Woolf?, Freedom, Death in Venice, and Waiting for Godot. Reminiscent only; no direct links. Reminiscent for me, not necessarily for you. Just the feelings of aggression, pain, anger, and frustration. And a faint hint of hope.

Not much of a narrative trajectory in the work. Impressions. Chunks. No resolution. Unclear if we can hope for resolution. Maybe that lies in Kelly trying to say “yes” to life instead of “no”, like the men in her life have been saying. Kelly is packing for the future, so maybe this is her story, a feminist one, a move forward, or sideways, not to forget, but to redeem. Or maybe resolution and redemption are up to each one of us in the audience. No closure, but openings. If you like this approach to drama—and you might, if you like the idea of the Fringe’s Dramatic Works Series—you’ll find this well-executed production enriching.

Under the direction of Tanya Mathivanan, Dying City at the Vancouver Fringe is very well acted, and the stage and sound are skilfully created with a minimalist aesthetic. Critics of early productions of Dying City (it appeared in London in 2007, then in New York’s Lincoln Center, and the script was nominated for a 2008 Pulitzer Prize for drama) felt that the character of Craig, the soldier, wasn’t as fully realized as that of Peter, the actor, but in this production, Garland Chang brings both brothers fully, distinctly, and aggressively to life. And Christine Bortolin, playing Kelly, the widow and therapist, skillfully holds the brothers together—and apart—while showing us Kelly’s own painful recollections and struggle to restart her life.

I left the theatre knowing I’d like to see more work by Christine Bortolin, Garland Chang and the crew of Aenigma Theatre. I’m less sure about seeing more of Christopher Shinn’s work. The atrocities of Abu Ghraib may still haunt us, but they’ve been supplanted by new atrocities, and the source of Craig’s and Peter’s angst in this work seem oddly misplaced. Yet, if you’re feeling in a serious mood, you’ll be rewarded by this play.