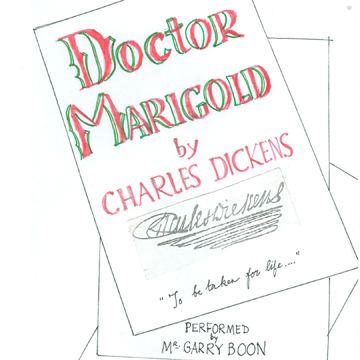 If Charles Dickens were alive he would kiss the thespian Garry Boon for telling his tale. (Please Note: thespian this is not a new quirky sexual orientation.)

No Garry Boon sells as he tells you the story of Doctor Marigold with carefully chosen words tripping from his tongue, modulated for effect.

It is 1864 and Doctor Marigold is not a doctor at all but a cheap jack, a fast talking market seller. Doctor is merely his name.

I got to listen to Charles Dickens lucid prose- the vowels, the consonants, the syllables; the rhythms break over me like waves.  His world is a stage with coarse jokes, pain, poignancy and emotional excitement.

Garry Boon moves the story from selling his wares, to selling us votes, to selling his hand in marriage. He watches his wife abuse their daughter and both die leaving him utterly alone in his cart. Redemption happens when he adopts a young deaf and dumb child whom he names after his dead daughter Sophie. He buys her a new cart and stocks it full of books, one that he writes for himself called Doctor Marigold’s Prescriptions.

Come hear Garry Boon nail Charles Dickens' story for you. Guaranteed Charles Dickens will kiss your ears and you will be transported to another time and another place.

Doctor Marigold is on as part of this year's Vancouver Fringe. For more information go here.