Death in Venice: a masterpiece of beauty and destruction 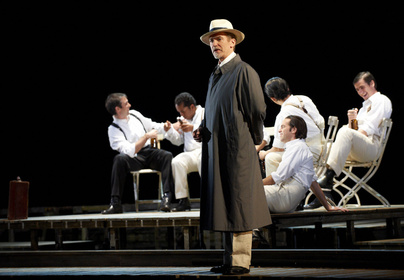 Alan Oke, front, in the Canadian Opera Company production of Death in Venice

The Canadian Opera Company’s production of Death in Venice tiptoes so near perfection, it’s like a prayer of gratitude to the muses. In this case, inspiration came from life. Both the novella’s author, Thomas Mann, and the opera’s composer, Benjamin Britten, had life experiences that fed into the story of an artist’s demise. With world-renowned actor and director Yoshi Oida at the helm of this production, the story is at its most poignant, a masterpiece of beauty and destruction.

Death in Venice reveals the winding journey of novelist Gustav von Aschenbach from prominent success to humiliation, despair and a lonely death. Aschenbach travels to Venice in search of inspiration. There, he encounters an adolescent boy with such all-consuming beauty that Aschenbach becomes obsessed with him. He writes of his love for the youth, but he can’t tell Tadzio. So, it becomes a degrading, isolating love that binds him. Even when he knows the deadly cholera is sweeping through Venice, Aschenbach cannot leave the place where Tadzio is. So, he accepts the stripping of his dignity, piece by piece, until he’s left with none.

The production bears the mark of Oida’s direction in its clarity. There’s no melodrama or sloppy emotion in this show. Tenor Alan Oke as Aschenbach communicates each moment with piercing clarity, no showy demonstrations of feeling. Baritone Peter Savidge plays seven, widely varying roles. Nonetheless, he delivers each part with a clarity that evokes each character strongly, without anything extra.  The muted antagonism between Aschenbach and Savidge’s many characters has its subtlety to thank for its building fury. Although both Oke’s and Savidge’s vocal performances are superb, it is not that but poignancy of what’s happening to Aschenbach that fixates the audience. That is thanks to Oida for his devotion to unadorned honesty.

The dancers, however, did not communicate that same level of truth. They were energetic and graceful, but they didn’t seem to be on the same dramatic plane as the Oke and Savidge. This, unfortunately, includes Adam Sergison as Tadzio. He has the perfect aesthetic quality for the part, and he moves well. However, he did not commit any emotional investment to the moments with Aschenbach. Although they never speak, they do see each other. In the final moment of Achenbach’s life, they even acknowledge each other. Even then, there was no clear emotional meaning in the gesture; it was staged movement. What seemed, with its power, to drain Aschenbach of the last dregs of life in him, had no meaning for Tadzio. Although some imbalance between them is fitting, there was too much of a gap.
Even so, Oke’s commitment to loving the boy was too strong to doubt. The set, designed by Tom Schenk, added an ingenious dimension to the drama. A maze of docks and enclosed water, it seemed to offer escapes and traps in every moment. One of the most poignant moments comes when Oke, following Tadzio as if by gravitational pull, finds himself trudging through the water in his suit and dress shoes. It’s difficult to imagine the heart-wrenching story without a set that adds such force.

What is the tragedy of this piece? The stripping of dignity from a man who’s done everything right; the paralysis of unacceptable love; the trap of love that can’t be admitted; the inescapable destruction that awaits even the most beautiful youth. Oida breathes life into any and all of these devastating truths Death in Venice, a heartbreaking feast for the senses.

Death in Venice by Benjamin Britten produced by the Canadian Opera Company runs in Toronto until Nov. 6, 2010 at the Four Seasons Centre for the Performing Arts for more information go here.