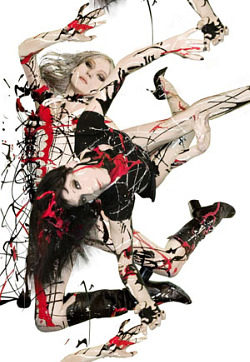 Smash Up at Dance in Vancouver

Dance in Vancouver's Program Two featured work choreographed by Dana Gingras and performed by the 605 Collective and Animals of Distinction.

New Animal is a delightful work full of vitality. Influenced by hip-hop and other forms of urban dance, it is distinctive for its rich communicative power. We tend to think of spoken language as our primary mode of communication but the word can refer to any “two agents which share a repertoire of signs.”  New Animal demonstrates that expressive body language is as meaningful as speech. Oddly, while most dance performances can be said to possess a unique vocabulary, they do not all possess this expressiveness – a work can be detached or obscure, referencing isolation as easily as inter-activeness.

Part of New Animal's appeal may be that it is grounded in popular dance: the performers seem fully human and familiar as they gyrate to high energy club music. There is humour in their movements – one figure enters the stage by knuckle-walking like a gorilla – and this humour is also familiar: yes, we are human-monkeys, and yes, for all our sophisticated technology, we are appetite-driven social creatures like our evolutionary forbears. New Animal places dancers in a context that is familiar and celebrates the simple pleasures inherent in that position. Rather than repressing their humanity for their art, the dancers seem to carry their social context with them in the work.

New Animal is athletic and powerful. Dancers use the floor to execute swift falls and leaps that see them go from prone to standing in seconds. Their interactions onstage are complex and gestural, deriving from natural body language rather than from an external geometry.  Dancers transition from one animalistic pose to another, and then intercut these shapes with more abstract movements that are aligned with the music: staccato arm and torso movements are matched to the techno beat; when the music shifts to an off-beat cabaret number, the dancers mass themselves together in a group and totter across the stage.  Though their grouping suggests eccentricity, or even drunkenness, it's clear that what they are primarily responding to is the tenor of the music.

Animals of Distinction: Smash Up
choreographed by Dana Gingras

Chain Reaction is an unusual multi-media work that incorporates dance and digital animation.  Two women lie in a white rectangle onstage, dressed in full body suits, illuminated by a purple light. To the sound of pulsing electronic music they contort on the stage while a maze of white interwoven lines flows over their bodies.

In a post-performance artist talk, Dana Gingras described the technology used to develop animation for the piece: software also called Chain Reaction allows for real time animation.  This means that while the performers have preset marks onstage, and determine where they need to be by following the music, the projections themselves are always live and ever-changing.  An element of spontaneity exists in each performance.

The combination of animation and dance creates an interesting tension on the stage. The dancers remain largely supine, rising briefly in spastic motions that are tied to the music, then freezing in contorted poses on the floor.  Flowing ghost shapes seem to colonize their awkward bodies, and it is as if the dancers are simply a canvas for the spectral illustrations that hover overtop.

As if this were not enough novelty for the audience to contend with, Chain Reaction incorporates a second element of animation related to the music: sound is generated by a drawing program that “reads” lines “drawn” on a screen. Dots result in short bursts of sound, dashes in longer tones, and wavy lines create pulsing melodies.

So much technological interference might have produced a work that was overwrought, but Chain Reaction succeeds in creating a truly multi-media work.  The animated elements are flashy, but their use has been thought though, and the dancing is not lost in all the action. Chain Reaction retains the physical intricacies and daring that are unique to modern dance while still managing to transpose them into the realm of new media and popular culture. It is a paradoxical work, both challenging and accessible at the same time, and therein lies its success.

Double Bubble, also choreographed by Dana Gingras, is by comparison a sparser piece, without the brilliant visual effects but there is a kinship with the earlier work. As in Chain Reaction, this performing couple is constrained by the visual and sonic elements of the work: the white rectangle on the floor, and frenetic music with a strong rhythm.

With less visual stimulation, more emphasis gets placed on the relationship between the dancers.  They use each other as props: the man lifts the woman feet first, while she presses her hand against the floor.  They climb over each other, run towards and swing around each other.

There is an urgency to the work that arises out of the combined elements of fast music, bold gestures, and the narrow area in which they work. Though the piece in minimal, its elements are evocative, suggesting everything from a war zone to a shattered relationship.

Double Bubble is high energy and features strong choreography.  With its focus on the interactions between dancers it makes an excellent foil to Chain Reaction.