Dance in Vancouver, Program One: humans and technology 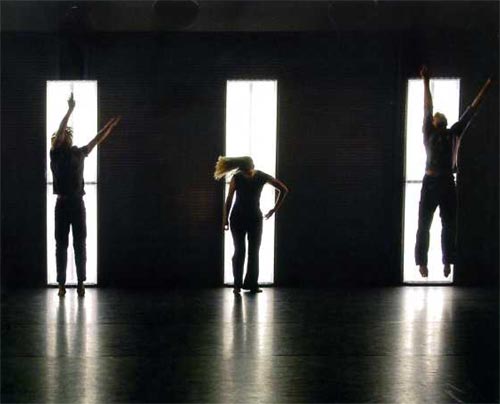 MovEnt part of Dance in Vancouver

MovEnt presented an excerpt from Surge, a study of different of metaphors of power: power as energy (whether industrial, mechanical, or electric) and power in relations between performers. As the choreographer's notes describe it, Surge deals with “the physical power held within the muscles, bones, and spirit of the body, but also the power that one body, one being, can hold over another.”

As three dancers enter they are accompanied by industrial noise – a thudding sound, like a train running over tracks, or factory mechanism repeatedly striking its base. The figures are illuminated from the back of the stage by three upright rectangles of corrugated metal that reflect a white light, casting the dancers in silhouette.

Gestures are charged with energy but they are controlled – they do not suggest passionate excess but seem cool, calculated, and symbolic. Though strong, the dancers are nimble and light: they touch down on the floor the way a bird moves from branch to branch – the floor is not a resting place so much as a point of contact in a long and complex trajectory.

The music shifts to a fusion of lyrical piano, slide guitar, and heavy percussion – sounds that are well matched to the dancers movements which are balletic, modern, and rhythmic. This strange fusion of delicate control and (seemingly) involuntary pulsations is the most pleasing effect of the piece: the dancers create a hybrid form of movement that is fresh and evocative. Their focused and abstract responses to the music make them seem other than human,  like small organisms –  sea anemones or protozoa – they are responsive to the environment yet appear alien, as if they exist in an alternate (musical, energetic?) ecology. Perhaps they are experimental subjects in a Petri dish getting zapped with microwaves...

The music falls away, and the performance changes gears. Now there are two women onstage engaged in a competition for space. They step around and in front of each other, facing the audience with pasted-on smiles. It is a comical interlude, a game of one-upmanship, but the point is clear – conceptually, power is about winning as much as it is about kinetic energy. This jump from definition one to definition two is a little jarring – suddenly the audience is moved from abstractions into human relations. It also underscores the fact that Surge is an exploratory new work.

Surge is conceptually challenging and technically excellent.  However it is uneven – at least in excerpted form – and comes across as a series of inconclusive sketches.  I was left unsure as to what message is really at the heart of the piece – aside from someone saying (metaphorically) “Hey, I have this cool idea inspired by the dictionary.”

Combining projected images and dance, this excerpt derives from a longer work about human experiences of urban architecture. A screen occupies the back wall and aerial shots and street views of Vancouver are combined with live performance by dancers who are also featured in the projected clips.

Sonically, the work is of a piece with its theme. Music is a rhythmic cacophony that imitates traffic and urban white noise. A periodic voice over describes a city where all human life has disappeared. The projected images move from still shots of skyscraper walls in the sun, to snarled night traffic, to pedestrian filled streets. On stage, seven men and women enact vignettes that relate to the imagery on screen: sometimes they are in dialogue – as when two men interweave their bodies while discussing a transit route. At other times they embody more abstract elements of the city: they stand in grid formats and turn slowly, resembling the movement of light itself across the face of a building.

Physically, the performance is informed by popular dance forms – hip-hop and break dancing – and also by the more conceptual elements of modern dance. Sometimes the motions are robotic and constrained. The dancers’ motions refer to various distinct facets of the city: its vital human energy, its frenetic pace, its grid-like structures and geometric homogeneity.

The work closes with projected images of the entire cast on a rooftop at dusk performing Tai Chi while one lone figure in a suit and tie makes spastic gestures in the opposite direction. It's a nice visual pun: a working man focused on his own obscure goal, attempting to move against the grain.

Though obviously incomplete and a little slack in pace (buildings in the sun are very static objects, FYI, and dancers imitating them only marginally less so), WAKE is an endearing and accessible work– the performers are comic in the projected clips as they run through busy streets and jump over barriers, while the representation of architecture injects a contemplative aspect to the work.

The Plastic Orchid Factory reprised sections of a longer work called endDORPHIN, which was presented in full at the Dance Centre during the summer. In both incarnations, endDORPHIN, is a complex and dark work that explores human alienation in the context of futuristic technology. The work is dimly lit, dancers dress in black hooded jackets and pants, so that they seem armored and emotionally inaccessible. The music is frenzied techno that rises and falls in pitch, first at ear-splitting levels then with bass reverberating though the skull.  Barely legible voices describe a litany of fears and woes.

The excerpted version of endDORPHIN involves three performers, reduced from six in the original. It was interesting to see the work a second time: the original immersed the viewer in something like narrative while this version is more abstract. The focus is now on the relationship of the three dancers. Their movements are finely articulated yet they seem like the puppets of larger forces: they hinge at the hips, and their energy is generated from the limbs and the lower body – at no point do they seem to be in mental control of their own motions. The performers are trapped in an eternal twilight, cut on the diagonal by thin rays of orange light.

Where the longer piece creates a total environment, the shorter piece draws focus to dancers in relation to dance. EndDORPHIN in excerpt is a melancholy snapshot with a futuristic tone. It made for an interesting cap on an evening of dance about human relationships with technology.  All three works take strong positions on the subject, but endDORPHIN offers what is by far the most grim vision.

Part of Dance in Vancouver, Program One on October 14. No remaining performances.