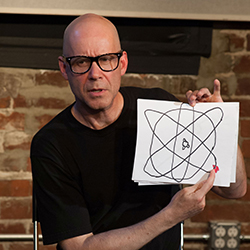 The Chronic Single’s Handbook, is a one man show written and performed by Randy Ross. The one-hour show has been featured at venues around New England and at fringe theater festivals in the U.S., Canada, and Edinburgh, Scotland.

In 2007, Ross has been laid off from work and has received a large severance cheque. He has a couple of options for how to spend his summer: he can continue relaxing in his bed with Vicodin, Ambien and Heineken looking for a perfect woman on Match.com and go on endless dates with no results or he can go farther to explore the options. After spending a lot of time on Match.com, with no luck on the dating front, he takes a four-month, solo trip around the world to find true love.

The story begins in Boston, USA, and goes astray in Greece, South Africa, and Southeast Asia.

Although the author tries to convey great messages about the importance of true love and commitment, he sounds very sceptical and bitter about relationships and marriage. He lays bare and exposes his less likable qualities. He tells of his amorous adventures with little snippets about his screwed-up love life, many of which will definitely leave you feeling somewhat uncomfortable.

If it wasn’t for his great storytelling talent, great acting, humour and engaging performance, the story itself is pathetic.