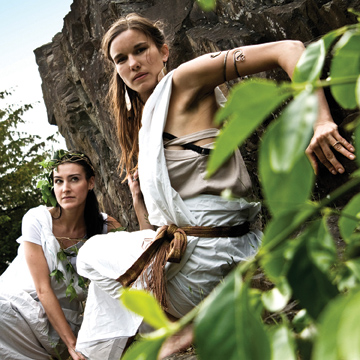 Et voila! The first-ever Plank Magazine tweet-along of a Vancouver Fringe play! Welcome to a tweet-along of ca.Sandbar which is an outdoor show at the Creekside Courtyard near the Sandbar restaurant on Granville Island. Brought to you by Forest Crone Productions, it's part of the Fringe Onsite program in collaboration with the Only Animal. Look at the map if you can't find it (my ticket said 1398 Cartwright Street which is incorrect). Here we go!

Start of ca.Sandbar - it's BYOV E at this year's Fringe!

Many vollies and usher types are wearing golden soldier-type helmets. I want one

Outdoor show, this one - am OK pleased the rain has stopped. #knockwood

Location is the courtyard near the Sandbar restaurant... Show includes original music

Waiting for words to begin... I hear a horn joining the music (which is lovely).

One woman is wearing a white dress - the others appear to be kitchen staff.

Aha! Soldiers in golden helmets are entering. with spears & swords.

The soldiers are everywhere. The woman in white is tied up and trying to escape.

"Dreaming a soul retrieval for Cassandra in a re-imagining of her tragic-comic life journey with Greeks, Gods, Trojans, & Elementals..."

I stopped to peer at the program notes in the ever-darkening night. Cassandra (I believe) remains tied up... Now alone.

Soldiers discover Cassandra. I suspect that she should have run in a different direction.

I have never seen this hidden courtyard yet people keep walking through. they generally stop & watch, then move on.

Wondering who did the choreography as no one is listed.

Essentially, ca.Sandbar is a dance/movement poem. and now Cassandra has returned - no longer tied up.

You HAVE to see this guy's costume! I don't think I'm supposed to watch him but it makes him over 10 feet tall!?! #fringe

Yep, should have taken Classics in university. Or more Theatre history?

Ca.Sandbar show over! On to the next!

Oh wait - ginormous note. they just ran the show without costumes (well most costumes) or props. Good to know.

One Favorite for the following Tweet: "Essentially, ca.Sandbar is a dance/movement poem. and now Cassandra has returned - no longer tied up."