Carry On: A Musical - Cheerful and Insightful 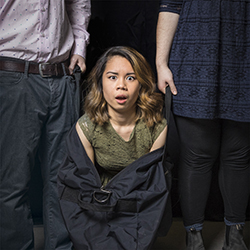 This production begins with a rousing welcome from a large ensemble of singers. Two-thirds of the-way through, marking a passenger revolt, the talented ensemble is turned loose again and the production bristles with energy. Much of this energy is sustained to the happy, and open, ending.

The first two-thirds of the production are necessarily quieter as we are introduced to a series of characters, mostly in pairs so that the relationships between them and the dysfunctions within them can be unfurled. I found all of these paired performances to be engaging, though quiet and sometimes a bit sketchy, and the baggage that each character carried was not always easy to identify. They are a diverse set of travelers, each more or less “midway on their life’s journey” and some, more than others, “lost in dark woods”.

George (Jesse Alvarez) and Amelia (Cecilly Day) present a consistently appealing, though tempestuous, infatuation chemistry. Tracy (Britt MacLeod) and Casey (Isaac McAndless-Davis) befriend, mentor, and nurture each other from beginning to end, a relationship that produces positive outcomes for both of them. There is also a more traditional, but well-acted, mother-daughter tension between Paula (Ashley Syer) and Kay (Clara Rose) that gets advanced to a new level by the play's end.

The strongest dynamics emanate from the responses of staff and passengers to the sleazy but somehow still likeable airport manager, Mr. Grant (Andrew Lynch), buffered by his skilful and devoted aide, Giselle (Jolene Bernardino). Two of the shows best songs, “I’m a Likeable Guy”, and (he may be a jerk but) “He’s Mine!” centre on these characters.

In the end, I found it affirming to see who recovered the red brassiere from Mr. Grant’s luggage and to watch the unlikely teenage pair – was it Preston and Rachel? – heading off together. Sometimes there’s no accounting for attractions between people.

If you like musical comedies with a range of character insights, situation insights, and a cheerful ending, you’ll like this production.

[A footnote: I’d like to be more sure than I am of just who played whom in this multi-character line-up, but for an amateur reviewer with limited text descriptions of roles and performers, only 90 minutes in the audience to try to follow the plot, enjoy the characters and songs, and with the pressure of a short review deadline, I may not have got all the performers and their roles properly matched up. If I’ve misattributed performers to roles, I offer my apologies to cast, crew, and readers: perhaps someone could add a corrective comment to the online review.]