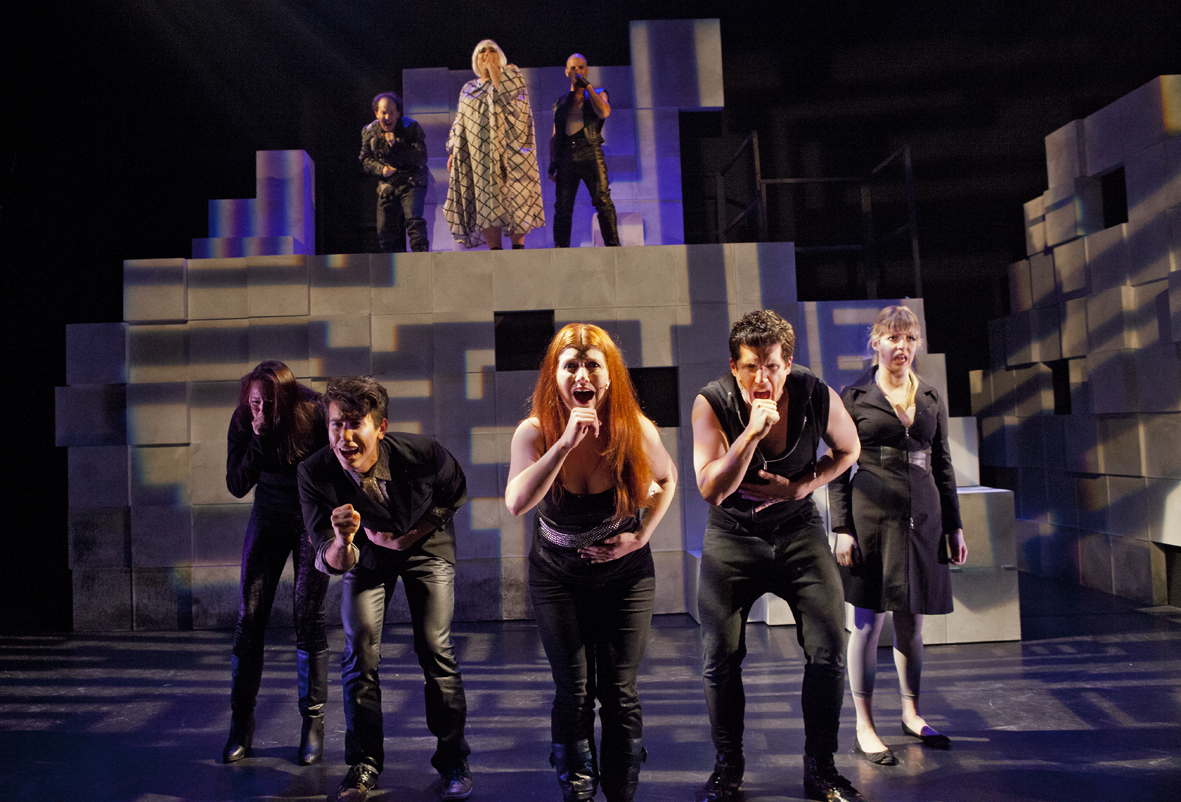 The story revolves around, as you can imagine, a “broken” sex doll but there are a number of twists and turns in the plot to keep you on your toes. The musical numbers are strong, the set is fabulous, and the acting is fun and fearless. Without giving too much away I’d like to say that my favourite parts were the very first action sequence, the umbrella montage and some very expressive leg acting.

The ensemble cast was strong: the characters defined and full, strong, beautiful voices and solid stage presence. Everyone looked like they were having fun, and that makes a show fun to watch! A special mention to Andy Toth who plays Mom and Lars, he was absolutely delightful. Neezar as The King has a beautiful voice, but I felt his comical outbursts needed to be rooted in real pain or anguish in order to be funny instead of embarrassing. I liked the choices that Riun Garner made as Billy Crumble. He didn’t fill them with quite enough energy to sell it for me though. The more unreal your character, the bigger your commitment has to be, otherwise the physical character choices become bigger than the character within them. Gili Roskies was fabulous as Ginger: consistent, straight faced and with a great physicality. Benjamin Elliot as Daryl was hilarious and not afraid to make a complete idiot of himself (in a good way). I feared for his voice in what I think of as the King Kong/Frankenstein scene as I could see and hear the tension in his throat. He was totally committed, but should support emotional songs more if his voice is going to last a full run of this play.

Broken Sex Doll is a production that knows its limitations and works them to its advantage. The songs were poppy, not challenging or impressive, but really engaging, a bit eerie and very catchy. The set was stark but not simple; evocative and versatile, and adding to the tongue-in-cheek nature of the piece. The visual effects were integral to creating this world of fast-paced, media immersed hyper reality. They could be overpowering in that sensory overload way, but they always served the story. The only gratuitous element was the smoke which was less visual and more a constant tickle in my throat.

Perhaps not so much science fiction as overemphasized present, I liked how relevant this play was. And I liked the reflection of what I think is the current gender struggle. In the story, most of the female characters are in subservient or gender stereotypical roles, true, but if you compare the way their characters are written in opposition to the characters of the men in the play? Well, objectification cuts both ways. It’s not enough to reverse the pendulum, we have to revisit our humanity at the same time.

Live performance is more important in our current society than it ever has been and I want to thank the Cultch for programming yet another show that appeals to a younger audience. I’m sure a large portion of the audience on opening was friends and family, but I do consistently see a younger demographic at this venue and I appreciate that.