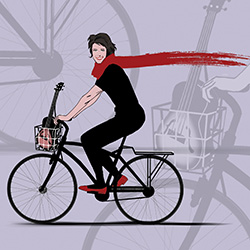 Berlin Waltz is a masterful blend of musical storytelling that left echoes in my head and heart for hours after I left the Cultch. I wandered around Vancouver, feeling Weltschmerz (literally ‘world pain’—you even learn some German in the show), pondering the invisible walls within my mind and seeing the outside world with different, more wistful eyes until I entered my next show to be transformed again and again.

Not only did this piece give me some insight into Berlin’s amazing history and the “admirable theory and questionable practice of socialism,” but it also made me want to travel. And start a movement. And make art.

The show had already begun when we entered the space. I didn’t notice at first. I thought that maybe “get in” was rushed and perhaps the writer/performer Devon More was making the best of a bad situation, doing sound check while the audience filed in. But then she started looping snippets of sound from what I can only call the “musical instrument station” stage-left and I started to pay attention to the pre-show music. Looping layers of complexity drew me in, priming me for the “performance proper” in a subtle but powerful way. The actor was the same, transitioning seamlessly between messing around with equipment onstage, storytelling, character portrayal and song. I have never in my entire life of attending live theatre seen anyone so relaxed and yet so fully present on stage. More’s authenticity blew me away.

I was expecting a heavy story. Cold War content and all that. Somehow More kept it light and whimsical, never once shying away from the dark side of her material; but in keeping her story personal and poetic, an outsider’s point of view, she infused her tale with so much hope and need for understanding and gentle commentary that I left feeling lighter and more adventurous. I was left with a note of concern by the warning: “History repeats itself as soon as we forget it.”

I LOVED the sock puppets, the jokes, More’s ability to harmonize WITH HERSELF and the beat-poet style of delivery that permeated this piece. The audience participation regarding the wall created a sense of scope and a visceral first-hand feeling of this massive, oppressive presence that was entirely unexpected.

The stage lighting was annoying. The "musical instrument station" was the only part of the stage properly lit, so More’s face was almost always in shadow. I assume this happened because of the projector and screen being used onstage. It was distracting and the only element of the production that felt less than professional.

It’s not often I find myself wishing I had a copy of the script of a Fringe play, but Berlin Waltz was so poetically dense, so beautifully crafted and structurally sound that I did find myself thinking I should ask afterwards if it was for sale. I didn’t. But I still might. I am a proud, newly converted fan of Devon More Music (www.devonmoremusic.com) and I vow to myself to always attend whatever they perform at the Vancouver Fringe, for as long as I live here.