A Beautiful View: light-hearted and nuanced 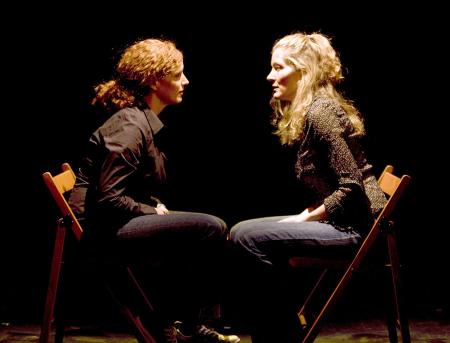 Although it marks a new direction for the renowned Canadian playwright, moving towards a more understated form of story telling than he has employed in the past, it nonetheless bears the hallmarks of a McIvor play: sympathetic but flawed characters, cutting emotional insights, and weighted silences that precede moments of revelation and push the story towards the surreal.


At heart A Beautiful View is a simple romance (with comic touches): two characters fall in love, and the audience watches their missteps as they stumble towards mutual understanding and resolution. Two women, Mitch and Linda meet in a camping store. Unexpectedly drawn to each other, they become lovers, but after a single night together they back away from romantic entanglement and scramble for the familiar shores of friendship. Over the years they watch each other work, party, marry, and divorce, all the while remaining so close that finally Linda broaches the unspoken: “We're like a couple, aren't we?” Mitch avoids the question, unwilling to acknowledge its implications. This coy pas-de-deux between the two characters is well executed: McIvor avoids cliches (ie. Mitch and Linda never dismiss their romance as drunken college experiment) and actresses Diane Brown and Colleen Wheeler have an excellent rapport, playing off each other with precision and sensitivity, and imbuing every gesture with subtle shades of meaning.

When the play's premise first became apparent, I sighed inwardly at the prospect of an evening of unrequited “friendship” with carefully muted lesbian subtext. I was pleasantly surprised when instead the two protagonists developed a very real and poignant relationship that tested the boundaries between platonic and romantic love. Counter to my expectation, A Beautiful View explored the subtleties of the characters' interactions, and allowed the relationship to mature and grow over time. Though Mitch and Linda find it difficult to express their feelings to each other early in the play, they do speak their minds in asides to the audience, letting us in on all their inner monologues – doubts and desires both. The picture that develops of their relationship is complex and multi-layered, and it feels authentic.

Some audiences may find A Beautiful View overly earnest. McIvor directs like the teacher in front of a classroom who waits for all-eyes-up-front before carrying on to the next beat. When Mitch and Linda gaze into each others' eyes or when they confront each others' failings, the actors and director ramp up the tension to uncomfortable levels. It's a technique that risks provoking a love-hate reaction, but somehow in A Beautiful View it works. McIvor's direction underscores the intensity between the two women, and the awkwardness that is the result of their uncertainty, inexperience, and depth of feeling. These dramatic pauses also force the audience to stay with the emotions of the characters. By setting up scenes this way, McIvor implies that it is not enough for the audience to simply read expressions on the characters' faces, we must take the time to experience emotions with them.

Unfortunately the play does slip over the edge, from earnestness into downright preachiness, towards the end. The take-home message of A Beautiful View is helpfully spelled out when Linda expresses the wish that relationships could simply exist between people, without the burden of labels. It's an obvious statement, but McIvor manages – just – to slide it past the audience, contextualizing the direct address with other meta-theatrical moments that open the show. Colleen Wheeler delivers the words with a light touch, further softening their didactic edge.

All the more puzzling then – given the unswerving honesty of the preceding performances – is the ironic post-script, in which a reunited Mitch and Linda get eaten by a bear while camping. Had I invested so much in these characters only to watch them get Thelma-and-Louised out of existence? Foul! Where's a referee when you need one? There's room in my mind to be skeptical of this kind of conclusion – too often in mainstream story-telling, same-sex couples are denied a happy ending. That said, A Beautiful View tells a sufficiently light-hearted and nuanced story that I am willing to take the scene as I think it was intended – as a send-up of those very cliches of doomed love. Thoughtful and thought-provoking, A Beautiful View was well worth the trek out to Burnaby's Shadbolt Theatre on a rainy Friday eve.