The Ballad of Frank Allen: Clever and Heartwarming 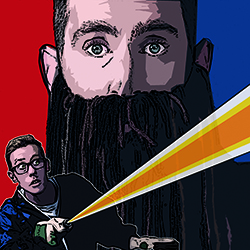 From the moment you enter the theatre, the play has already begun. Two men, Shane Adamczak playing Frank and St John Cowcher playing Al , are already on the stage clearly establishing their characters before you even sit in your seat. Adamczak being the rigid somewhat nerdy janitor and Cowcher being the slovenly couch-potato, their characters are the perfect juxtaposition for a comedy.

The Ballad of Frank Allan really worked to engage all of your senses. As the duo begin to speak, their voices carry you through the heartwarming story with a rapid staccato nature that keeps you laughing at the antics of a man who unwittingly has another man living in his beard. I might have enjoyed a little more respite from this tone from time to time, but it wasn’t overwhelming. Red and blue lights and wooshing hand cues were used to distinguish different points of view. A guy in the front even got sprayed with a squirt bottle, so beware!

Adamczak and Cowcher each played several minor characters making use of mime, different accents and minimal props. At times the minor roles were hard to follow, but overall quite amusing. Several original songs were sung with rich, full voices and played on the guitar, xylophone and laser drumsticks? All of which you can purchase on their CD at the end of the show. Adamczak’s voice in particular was quite lovely.

I had a really good time and felt a constant grin creeping up on my face throughout the entire performance. Adamczak and Cowcher definitely have their performance polished and, expect for a few very small, convoluted areas, perfected. Other than maybe for young kids (there is a bit of swearing), I think there’s really a little of something for everyone in this goofy play: comedy, interaction with the audience, physical theatre, romance (but not the overly sappy kind) and bromance.