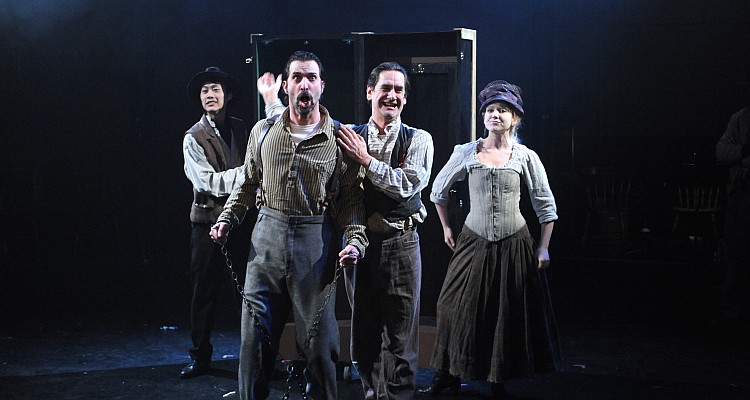 The Birdland Production of Assassins

Have you ever switched between your two favourite radio stations only to hear the very same song being played at the very same time?

Although such a rare occurrence can most likely be chalked up to statistical probability more than voodoo or the aligning of the planets, it still comes with a bit of a mental rush. Birdland Theatre and the UC follies have proven that theatre is also subject to inadvertent programming synchronicity with their simultaneous productions of Stephen Sondheim’s Assassins (let the shoot-out themed wordplay begin). Each represents hundreds of man-and-woman-hours of labour and creative effort, and as such do not deserve to be the subject of a cheap gimmick like a head to head battle of the Assassins - but sometimes there are circumstances in which a cheap gimmick is too perfect to ignore.

Assassins (music and lyrics by Sondheim with book by John Weidman) is a wry satire that breaks down chronological barriers to bring together those disturbed historical individuals who have dared end the lives (or attempted to) of America’s presidents, and puts them on display together in a sort of carnivalesque limbo.

Structurally, Assassins is a fragmented show that mixes historical recreation with psychological portraiture and surrealist fantasy, but nevertheless makes for a surprisingly streamlined experience. Thematically, Assassins is complex, arguing that it is not cancers like John Wilkes Booth and Lee Harvey Oswald that make the nation of America sick, but that it is a sick nation that allow cancers like them to flourish. Musically speaking Assassins is Sondheim at his most daring. His score draws from genres as diverse as country, folk, opera, and of course, Broadway, while his lyrics are often upbeat and darkly optimistic, setting a mood of ironic celebration.

Birdland Theatre’s production (a collaboration with Barrie’s Talk is Free Theatre) playing at the Theatre Centre, is a magnificent experience full of talent and visual grace. Opting for a design treatment blending Dickens’ London and the American wild west, the audience is presented with a rustic and smoky stage bordered by banners, mobile set pieces, and musicians - a particularly effective touch given that the Theatre Centre is such an airy and open space that it often feels as though it dwarfs the productions it houses.

Director, and accomplished musical veteran, Adam Brazier offers big bold strokes while skillfully marrying the work’s moments of manic glee and awkward menace. Brazier’s most daring choice is to have the cast double as the band, each playing an instrument at the periphery of the stage when not performing dramatically and collectively producing a skillful but clangy marching band sound. It’s not the first time a Sondheim production has used this arrangement (the most recent touring production of Sweeny Todd did the same), but it is not a common occurrence either. On the technical side Gareth Crew deserves a special nod for his circular and spotlight-heavy lighting design which works hand in hand with Brazier’s rich vision.

Amongst the performers Graham Abby delivers a brilliant rant as Samuel Byck, Eliza-Jane Scott nails the scatterbrained housewife Sara Jane Moore, Steve Ross is fun to watch as the deluded and narcissistic Charles Guiteau, and Paul McQuillan is perfect as the snaky and manipulative John Wilkes Booth.

The UC Follies production is, by comparison, a let down. Director Jocelyn Geddie works some delightfully comedic and provocative elements into her production but diminishes their efficacy with uneven pacing, and often static blocking. One of the most noteworthy differences between the UC Follies’ production and Birdland Theatre’s is Geddie’s stunning and gut-wrenching inclusion of the uncensored Zapruder film. Whether its inclusion crosses the line between fair-use and the exploitation of tragedy is a whole other question. Even if one forgave the evident budgetary differences between the two productions, UC Follies’ is nevertheless guilty of presenting an ordinary treatment of a most un-ordinary work.

Despite a less lustrous experience overall, some of the cast did manage to impress. Matt Duncan was both virulent and comedic in his turn as Samuel Byck, and Ann Pornel was irritatingly charming as Sara Jane Moore. By far the standout of the night was Michael-David Blostein whose dark voice and restrained menace made him a delight to watch as John Wilkes Booth.

Regardless of the production, there is no denying Assassins’ subversive power; it’s a perfect reminder that musicals are not limited to being artistic pabulum or sarcastic parodies, but can be as challenging as any straight-up drama.