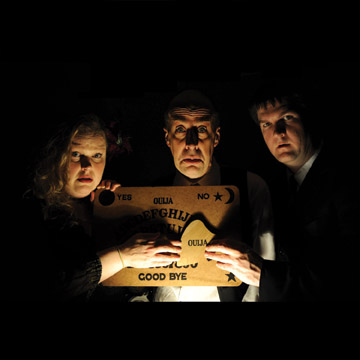 When I saw Brian Anderson on stage as Arnie in Arnie the Carnie's House of Mystery, my hopes were high, as I had seen him several times performing with Vancouver TheatreSports League. My expectations were well-met with this informative, whimsical, and thoroughly enjoyable production.

Arnie leads us through the life and work of Simon Mackenzie, a mentalist. But is Mackenzie's life and fiery death itself real? A Google search afterwards brought up no leads. But just sit back and enjoy the story.

A personal tragedy makes Simon's search for a connection between this world and the world of the spirits ever more desperate. With the right intense electrical currents, can a connection somehow be made?

Philosophically such an inquiry demonstrates the apparently blurry line between unseen, incomprehensible natural forces and the supernatural. Is there a difference really? Recall Arthur C. Clarke's famous dictate: "Any sufficiently advanced technology is indistinguishable from magic." Houdini, despite or perhaps because of his interest in debunking others, was deeply involved with efforts to harness the occult and communicate with the dead.

But back to this show, which is more about fun than deep contemplation. Arnie seeks out audience members to participate, and they all seemed to enjoy the experience. There are plenty of "How could he possibly do that?" tricks.

The assistant Trixie (Elizabeth Bowen) adds a great deal of fun to this show. She slyly upstages Arnie, and makes her presence boldly obvious. The keyboard player Matt expertly uses music to ratchet up the intrigue and accompany the denouements of the tricks. This show is vintage in terms of tricks, costumes, and speech. It plays with the idea of audience naïveté.

If you have any interest in showmanship and magic, attend this well-crafted and thoughtful show.