Archy and Mehitabel: Cats and Cockroaches Are Funny 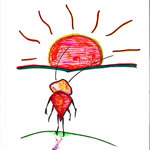 Victoria: First off, if you want to see a cockroach, a cat, an ant, a hoard of crickets, an army of insects and a dancing, prancing tabby cat with nine lives with different toms, all acted by a scruffy guy in a white-polka dot green shirt, you should go to this show. Second, who really doesn’t want to see a show about a cockroach? The concept is creative genius at its best.

Archy and Mehitabel is a blending of Don Marquis’ work, with the version penned by the actor Jeff Culbert, in which the star of the show is an ugly poet-turned-cockroach. Culbert’s performance is precise and quick, allowing the audience both comedic and serious glimpses from creatures who never see much past our toes. Mehitabel, an alley tabby and always a lady, is laugh-out-loud hilarious—almost to the point where we lose Archy, but then Culbert does the seemingly impossible and pulls us back into Archy and loses Mehitabel without the craving to go back to the stray.

Woven slickly, the only downside to this show is that the audience doesn’t get to see how the two main characters met. Sometimes the balance between light and dark veers a little off course, more due to script than to the performances, but this is a really solid show that just needs one or two more script tweaks to be truly phenomenal. Five out of six cockroach legs waving in the air for this one –but that last one might just be a damned stickler.