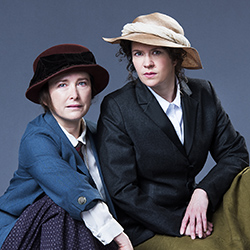 And Bella Sang with Us is a play about the first women police officers in Canada. Set in Vancouver in 1912, these two women: Constable Harris, played by Leanna Brodie, and Constable Miller, played by Sarah Louise Turner, try and make it in the “men’s” world of policing. This is a serious drama that authentically portrays some of the issues that the city still grapples with today. With raw emotion, splendid music, and uncomfortable issues, And Bella Sang with Us is an intriguing fictional history of Vancouver.

Directed by Sarah Rodgers, And Bella Sang with Us is performed without the actors directly using any props. Instead actors who are not in the scene stand on the sidelines using props to make sound effects while the playing actors mime out what they are doing. While the timing of such mime-ing is very impressive, it was confusing as an audience member to determine what kind of object an actor was supposed to have in their hand and to remember what it was. It was confusing to watch, since the stage was not all that big, to try and figure out why there was an actor in the corner making sounds that did not seem to be connected with the scene. While this style of performance is interesting, it was, at first, unclear what was happening.

With the exception of the two main ladies, each actor played several different parts in this show, by donning different costumes. This was also unclear and I believe more contrasting costumes could have been put to use as it was difficult to tell who the actor was supposed to be portraying in any particular scene.

Besides some ambiguity on the part of the production, the overall plot was fascinating and exciting: these women chase bad guys, sleuth around Chinatown and sing! They meet some interesting characters who are in for criminal acts, but Constable Miller is unconvinced that they are all bad and thinks they are in need of assistance rather than punishment. A lady-brute that is only calmed by love songs and a young prostitute teach the new police officers about their lives and reality in Vancouver’s Chinatown in 1912. Sarah Louise Turner does an excellent portrayal of Constable Miller as the wide-eyed and innocent do-gooder, and Leanna Brodie comes into her role as the world-worn, street-wise fighter, Constable Harris, more towards the end of the play. From rough beginnings these two characters learn to trust and rely on each other through their ordeals.