Ali & Ali 7: hey brother can we move a little further? 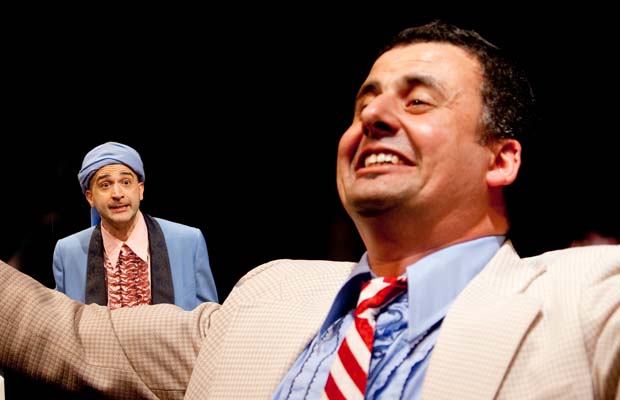 Ali & Ali 7: Hey Brother, Can You Spare Some Hope and Change? begins with a slide show that is both amusing and quizzical. Set to a loud thumping beat, the audience is shown a quick succession of images of Muammar Gaddafi looking eccentric, Stephen Harper sporting his blue sweater and stock sympathetic smirk, and Tom Cruise and Jack Nicholson from the film A Few Good Men. We are left to ponder which of the two leaders looks the most ridiculous: a Salvador Dali-esque Gaddafi wearing tinted shades and long robes, or an awkward Stephen Harper wearing a suit on a stage with dancers in saris.

These images set the tone for Ali & Ali 7, presented by Neworld Theatre at the Cultch, and encourage the audience to laugh cynically at its own cultural perspectives. Certainly Gaddafi acting theatrical seems weird to us, but isn’t a picture of Harper with a kitten curled up in his lap just as odd?

Cultural perspective, “otherness”, and justice are the overarching themes of Ali & Ali 7, a sequel to Neworld’s 2004 of Ali & Ali and the aXes of Evil, which dealt mainly with issues related to the so-called war on terror and the Bush administration. The operating principle of Ali & Ali 7 is to remind us that, despite the election of Barack Obama, we are still living in the same caustic world and dealing with many of the same issues of inequality.

After the slide show, an announcer introduces our hosts and reminds the audience that our problems are petty in relation to the rest of the world’s populace, and that we are privileged and better off than most.

To further set the mood, images throughout the play are projected on a screen made of what is perhaps an old parachute, or bed sheets; above there is an overhang of mangled Christmas lights. A hastily put-together sign blinks “Ali & Ali”. The bare set consists of no more than an oriental carpet and a metal trunk. Overall, the effect is reminiscent of either a comedy tour in support of our troops, or a make-shift theatre in a jail cell.

After a brief comic video of Chippendales with superimposed heads of our hosts, we are at last introduced to Ali Hakim (Camyar Chai) and Ali Ababwa (Marcus Youssef), two stateless immigrants from the fictitious Middle Eastern country Agraba. Some critical facts are quickly established: Agraba is a war-torn country that our hosts can never return to, they work at Saleem’s falafel shop on Commercial Drive, one of them owes money to Quickie Pay Day Loans. The duo’s co-host, Raugi Yu (referred to mostly as Yogi) acts as straight man and cultural interpreter throughout.

Soon the plot develops into the main thread of the show: a hastily summoned deportation hearing for our hosts, whom we discover are illegal immigrants suspected of being terrorists and supporters of the Agrabanian People’s Front. Sukhvinder Dhaliwal (Laara Sadiq), a character who makes an awkward transition from obsessed fan planted in the audience to RCMP officer, takes the stage as judge, jury and executioner. Throughout the rest of Ali & Ali 7 she presents evidence against the protagonists, which they defend as various films and TV shows they have worked on or are researching. For instance, photos of the pair near a nuclear plant becomes research for a TV series about a man aiming to become the director of the Atomic Energy Institute; a quote calling for the death of infidels is explained as a show they developed in Agraba based on the popular series 24. The defense of each accusation is enacted through brief sketches depicting the essence of their work.

If this is beginning to sound frantic and scattered, it’s because it is. Ali & Ali 7 is essentially a series of comedy skits based around a main thread that grapple with issues as far-reaching as: stereotypes of Arabs and “the other”; the deficiencies of the Obama administration; Canada’s immigration policy; the state of current world affairs; problems within the RCMP (including Tasers); global injustice. The effect is somewhat like watching a more globally defined episode of This Hour Has 22 Minutes. Certainly these issues are interrelated, but as the narrative progressed I couldn’t help but wonder if Ali & Ali 7 could have benefited from some gentle pruning to create more focus and encourage deeper story development.

The inquisition of our hosts is based on the true story of five detainees currently being held in indefinite and arbitrary detention at Kingston Penitentiary. Ali & Ali 7’s writers (Camyar Chai, Marcus Youssef and Guillermo Verdecchia) attended part of the bail hearing for Mahmoud Jaballah in Toronto, and wrote this sequel as a response. Whereas the first Ali & Ali dealt with the war on terror in regards to America’s role, this sequel deals with Canada’s part in this global issue. The absurdity of the Canadian Security Certificates is the crux of the play, and deserves more singular attention. The show's climax, the result of our hosts’ trial, is poignant and terrifying; the characters finally develop into three dimensional beings rather than caricatures of themselves, and the effect is quite moving. It made me wonder what would happen if the writers were to take off from this point instead of taking so long to establish the injustice in the first place.

Maybe I’m being too optimistic, but would it be too crazy at this stage to assume a shared sense of understanding on these kinds of issues and move on from there? Or perhaps my hesitation stems more from the fact that, coming up on 10 years since 9/11, I’m not sure if brings anything new to the table. Is the fact that Canada plays a role in global matters – and specifically the ones dealt with by the show – really all that surprising? To some, I suppose, perhaps. But to those of us who regularly attend shows at the Cultch, I would guess the matters being addressed here are not new to us. Is this not just preaching to the converted so we can nod in appreciation and indulge in our First World guilt? This is a commendable effort and an interesting topic, but what is the purpose here? I wonder if it would not be more interesting to begin to unravel the discussion from a point further down the line. But perhaps we’re just not there yet.Ali & Ali 7

Ali & Ali 7: Hey Brother (Or Sister) Can You Spare Some Hope and Change? continues at the Cultch until April 24th before moving to the Shadbolt for April 28th - May 1st. For more information go here.