The After After Party—Too Many Drugs, or Just Enough? 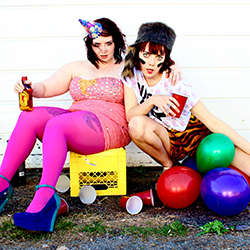 In a subgenre known for its distinguished wackiness, The After After Party ups the ante of the classic ‘hangover plot’ where close friends try to reconstruct the gory, glorious, and ever-elusive details of Last Night. In a script loaded with rapid-fire non sequiturs, crosses-the-line-twice shock comedy, and excessive blunt force trauma to the fourth wall, Katey Hoffman and Cheyenne Mabberley deliver an inspiring performance as a pair of twelfth graders just trying to find their way to the next party (while debating the metaphysics of which parties have an ‘after’ relationship to which).

Hoffman shines as Fiona, possessed of an intensity and manic physicality that liken her to a demonically possessed Mary Poppins. Hoffman’s capacity to leap from one emotion, posture, or imagined scenario to another is used to hilarious effect. Mabberley’s portrayal of Jules, understated only by contrast, provides the emotional centre that’s so essential to bringing a buddy comedy home.

At its best, the script feels like a Monty Python show in triple fast forward, which is about as harrowing as it sounds. This show helped me to believe in things. It showed me that a comedy can be raunchy, offensive, emotionally believable, and political all at the same time. The (more than) occasional tasteless joke about MS or hobo crack is elevated by the wit and richness of the script as a whole, as well as the sheer commitment of the performers.

“We don’t know anything about discrimination! We’re white!”
“Sure we do! We’re women!”

The fact that these lines blend so seamlessly into what might otherwise be billed riotous but vapid buddy comedy attest to the masterful hands at work.

The After After Party: fast, cheeky, and definitely not for the faint of heart.