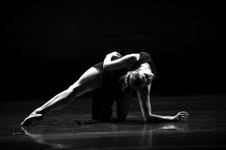 It’s not fair.  My recent tour of Vancouver’s Cultural Olympiad/VIDF/Chutzpah Festival enhanced dance scene began with the spectacular work of Marie Chouinard, who proved herself to be the gold medalist, the MVP and the world champion of clever choreography and gorgeous staging.  What could possibly come after such an audacious entry in the contemporary dance category?  Chouinard’s dancing shoes are hard to fill.

That’s what I thought last week before the rest of my tour really got under way, and I am happy to say, that although Chouinard remains top dog in my view, some of the other work that I saw definitely belonged in the final flight alongside the best.

Aszure Barton’s two pieces Busk and Blue Soup were my second stop along the way, and they were well worth the buzz that this Canadian-born New York choreographer brings with her.  This piece for nine dancers was a somewhat self-conscious examination of the notion of self-worth in the world of being an entertainer.  There were sections that reflected this theme in a way that tended towards the obvious, as the dancers “played” mimes and circus performers; however, overall Busk did not give way to imitation and stayed grounded well in the emotional and kinetic world of contemporary dance.  The dancers were costumed in dark pants and black hoodies that suggested the aspects of themselves that are revealed and hidden and revealed again as they inhabited, powerfully, the levity and the depths of being an entertainer.  I felt that the dancers were strongest and clearest when they moved in concert through some of the more abstract sections of the piece.  What I liked less was the inclusion of sections like the dancer as a mime, the very archetypal accordion music (that I recognized from the soundtrack of the movie Amelie), and the Cirque du Soleil-esque section that included one dancer with the remarkable ability to twist herself up into a tightly-wound pretzel.  These sections exhibited the talent of the dancers, but felt a bit loaded or heavy-handed for my liking.  Still, the entire piece had a look about it that was clear, playful and in spite of it being somewhat too leading at times had an enjoyable originality.

I found Blue Soup to be a bit more of a rewarding piece to watch.  The choreography seemed more coherent and the themes came across clearly in spite of being less obvious than those of  Busk.  Dressed entirely in blue the dancers easily took on this piece, which was fast-paced, extremely animated and, at the same time, deeply original.  All of Barton’s dancers are lithe and athletic and each one possesses extraordinary kinetic sensitivity.  Blue Soup was less driven by a narrative than Busk, and throughout this piece I found myself happily lost in a richly ambient world of high energy movement, variously textured music and lighting that, while not distracting, added a lovely element of depth to this piece.  Where Busk was reliant on somewhat obvious visual cues, Blue Soup took the dancers (and the audience) and a ride into a more abstract, but equally distinct world of excellent dancing and the kind of playful choreography that made me want to join in.