The Accident: out of the ordinary movment, unoriginal story 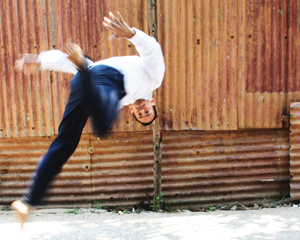 Jonno Katz brings us this 60-minute movement piece about the relationship between two brothers: Sebastian, the kind-hearted younger one, and Roy, the greedy older one. At first, the brother dynamic was touching and potentially worked well—like in the moments at the beginning when Roy stood up for Sebastian. There were also a couple of fresh ideas thrown into the clichéd storyline; for example, “The Shit Machine” (which you would have to see to understand), and a poignant moment that seemed to show an inner-aging process that was very well done.

Other than that, however, I wish that Katz had left The Accident strictly to movement because as the story evolved, it turned out to be display a lack of originality and seemed tired. One part in particular that just didn’t sit well was the “Dear God” monologue, an expository vehicle to show the younger brother’s feelings and intentions. And the ending was predictable and too drawn out. Another problematic point was the issue of age. The character of Sebastian seemed to be very young for the first half and then, all of a sudden, he switches to being almost the same age as his older brother. Either Katz played it too young for the first half, too old for the second half or it was a poor directorial and/or writing choice.

Storyline aside, Jonno Katz’s performance had a Mr. Bean-esque feel that worked well with his out-of-the-ordinary movement pieces. Big facial expressions, drawn-out reactions and practiced character changing made his routine worth seeing. The Accident did have a great soundtrack, but do they really need to play Barry White to get the point across that two people are having sex offstage? I don’t think so. Technically, the show was very well put together; fabulous lighting and sounds were used to create a magical environment and the show’s timing was perfect.

The Accident was satisfactory at best with a good performance but with a story lacking substance.