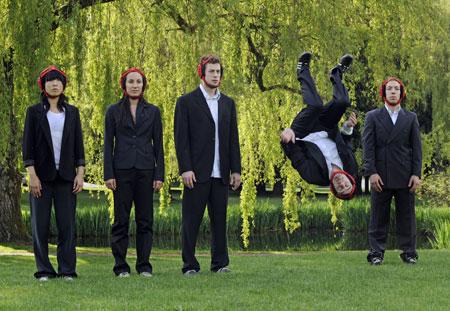 Audible by the 605 Collective, presented by Dancing on the Edge, is dance for the purist. Yes, the piece fuses genres—from martial arts to tango to hip hop—but the performers’ sheer physicality fills the stage, uncomplicated by a set, props, or elaborate lighting.

Despite the title, sound complements rather than dominates the movement: breath, the squeak of running shoes, and the audience’s laughter are often all that is audible. The piece is fresh, funny and utterly engrossing.

The five performers (three men and two women) begin the piece wearing tuxedo-style black suits, white shirts, and sneakers.  A subtle costume change signals each section of the piece:  jackets, shoes, white elbow pads, red ties, and (most noticeably) red wrestling headgear come off and on.  All five dancers usually share the stage in varied and continually shifting configurations:  two pairs and an outsider/leader, one pair and a trio, five dancers in unison, or five individuals.  At one point, all five run and then peel off into their own circles, like perfectly synchronized wheels.

The group clearly does not use the term “Collective” loosely.  Aside from the collaborative process of creation, the performers convey an overwhelming physical connectedness on stage.  Their awareness of each other is palpable.  In one case, Josh Martin appears on stage alone and seems to be practising a martial art:  he moves as he exhales and then freezes in postures, making comic use of facial expressions.  Shay Kuebler enters behind Martin and imitates him.  When Martin turns around, Kuebler strikes a self-conscious jogger stretch, trying to hide that he’s copying Martin.  One by one, the other dancers enter and follow suit.  Soon they all follow Martin, like dancers learning choreography in a rehearsal—then the roles are reversed and Martin struggles to keep up with the quartet.  The scene is hilarious and profound at the same time: it shows that dance is a language, and it makes learning to dance a metaphor for empowerment.

The program notes suggest that the collective intends, in “Audible,” to comment on the contemporary condition of being hyper-connected yet dislocated from immediate surroundings.  Fragments of speech —“Huh? What? So, maybe you could” — interrupted by jerky movements, humourously convey this idea.  In one repeated sequence, the dancers poke their fingers as if working a circuit board.  The finger-pointing sequence puts the “digit” back in digital and reminds us that acts of communication are always grounded in the body.

The movement has many other key motifs:  clasped hands, weight-bearing, spasmodic isolations, one-handed flips, floor rolls that turn into leaps.  It parodies tango, football huddles, military drills, and wrestling matches.   One eye-popping moment takes place when the group is casually walking downstage and Martin jumps into the air, somersaults, lands, and keeps walking (shades of Cirque du Soleil). Individually and collectively, the group executes incredible feats of both theatricality and athleticism, maintaining a phenomenal energy level.

But they are not a frenetic perpetual motion machine.  Instead, stillness punctuates the dance like the yoga pose savasana (corpse pose). Indeed, the performers often lie still on the floor. More than once, I found myself looking to the wings, expecting someone else to enter. Then I counted the bodies on stage and realized that all five were present. What was missing was the movement itself. The striking contrast between bodies in motion and bodies in repose is both visceral and spiritual. By incorporating stillness, 605 creates a sustainable physical aesthetic—one that also models a balanced way of being in the world.

Audible by the 605 Collective, was part of this year's Dancing on the Edge Festival and was performed at the Firehall Arts Centre on July 16 and July 18.