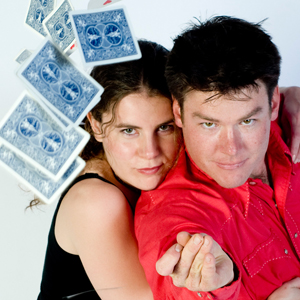 Sam Elmore and Gemma Wilcox in 52 Pick Up

Fringe performances are all about the hook: what combination of zaney humour, postmodern langauge-play, and sexual innuendo will lure an audience in to your show? 52 Pick Up is an example of some of the best of what the Fringe has to offer: clever and witty, it nonethless hinges on strong acting.  And while there is an element of chance in the structure, it still presents a satisfying narrative arc. The play begins with performers Sam Elmore and Gemma Wilcox scattering a deck of cards across the stage.  On each card is the name of a scene that illustrates a key moment in a couple's relationship.  For example "First Meeting"; "I Never Said That"; or "She Has to Go." Over the course of the evening each of the fifty-two scenarios are performed in the order in which the cards are picked up.

The real strength of this piece is the performers' one-hundred percent commitment  to the physicality of their scenes, many of which are only a few seconds (at most minutes) long.  The scenarios are leading and open-ended: a she-said/he-said argument, an apology for an un-named gaffe, a moment of tenderness remembered, an awkward phone call.  They are moments that most audience members can identify with, but they are very general.  It is the subtle facial expressions, body language, and the impeccable comic timing of  Elmore and Wilcox that actually imbue the scenes with emotional content. The most rewarding moments hinge on small details that pay-off later: the man waxes poetic on his girlfriend's laugh, and in a later scene we see the playful teasing that leads up to the moment. First meetings contrast poignantly with the break-up, first sex, and fights.  One of my favourite scenes is the "12 Step Program." The woman reels off a hilarious litany of ways to avoid the misery of post break-up blues: take a picture of your ex, glue a string to it and hold the other end to your heart, cut the string...drink, smoke...don't sit by the phone.  Genuine conflict and specific details are delivered with ironic humour and tenderness.

If there is a weaknesses in 52 Pick Up, it is that other scenes are overly vague, vacated of meaning in an attempt to achieve universality. The play relies on notions of a war of sexes, playing on gender stereotypes for laughs: the man who cannot communicate his feelings, the emotionally obsessive girlfriend. The script is intelligently written, however, and Elmore and Wilcox bring enough individuality to the roles to temper its predictability, in fact making this an asset: much of the humour of the piece derives from the lack of self-awareness in characters. They cycle through emotions but may never escape the cycle, and are always ready to fall in and out of love all over.  In the universe of the play this is exactly what happens.  Once all the cards have been retrieved, they are scattered in a new order and the show begins again

52 Pick Up builds a story incrementally out of these small events, each one delicately connecting the next.  The analogy of a house of cards becomes entirely apt: the couple's daily interactions balance and destabilize each other and together compose a precarious whole. The overall effect is a sweet send-up of  those behaviors that men and women fall prey to while navigating the stages of a relationship.

52 Pick Up is on as part of this year’s Vancouver Fringe. For more information go here.