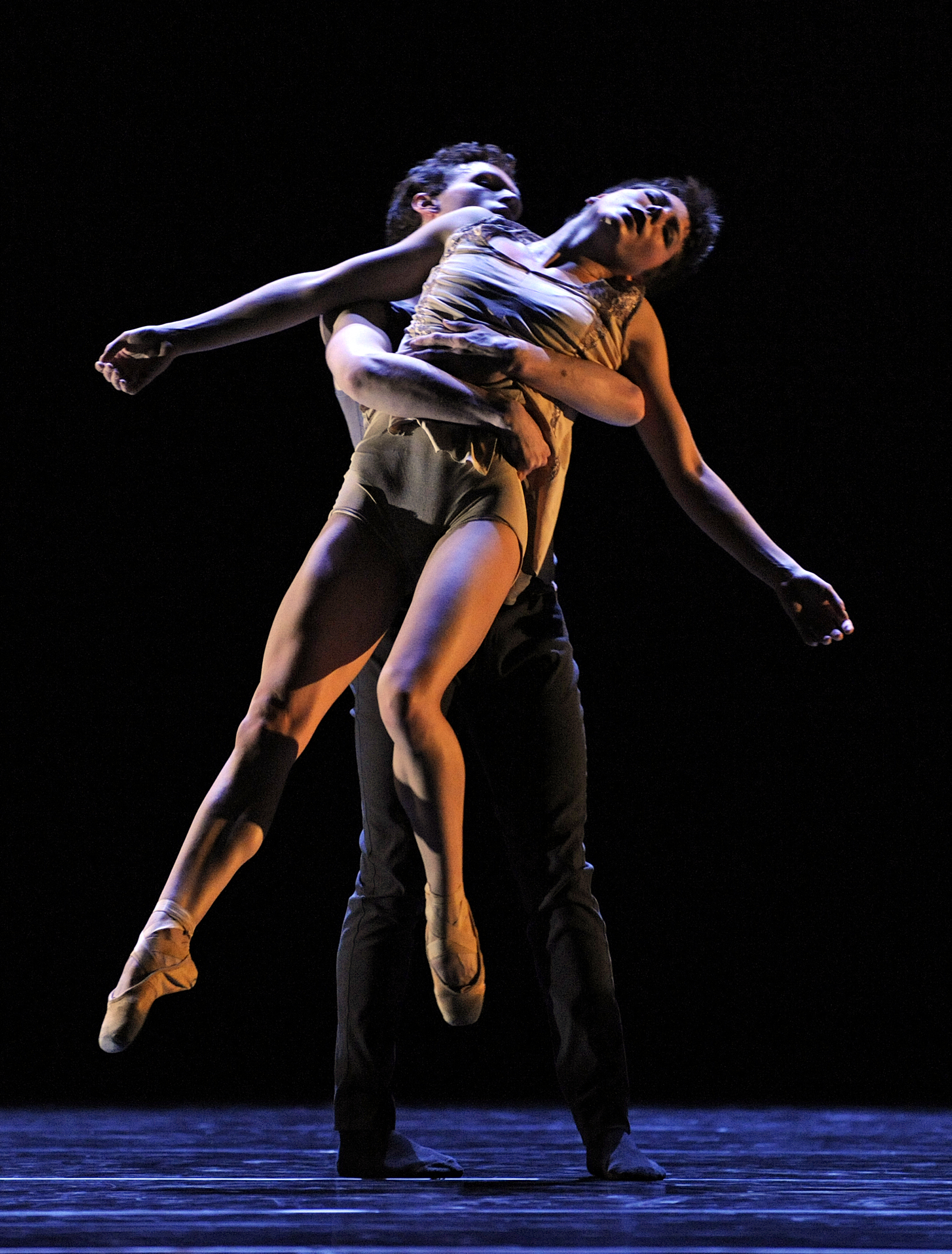 Last night was opening night for Ballet BC’s first performance in the 2011/2012 season in the Queen Elizabeth Thearre. And a wonderful opening it was!  A Canadian première, a world premiere and a wonderful revisiting and expansion of Doppeling  ( premiere 2009) by Canadian choreographer Simone Orlando.

In the 7:00 preshow talk Vancouver Dance writer Janet Smith interviewed both visiting choreographers presented in 3 Fold: Canadian Robert Glumbek with his World Premiere Diversion, developed for Ballet BC dancers   and Italian Choreographer Walter Matteini. This is the first time this Matteini’s work has been shown in Canada..  Tonight we saw the Canadian Premiere of his performance: Parole Sospese (Words Suspended).

The two men conversed with Janet Smith discussing their dances and way of dancing and ideas about dance. Both have used classical forms but tend to use more modern forms. In this dance Robert Glumbek gave his dancers pointe shoes and then collaborated with the dancers in their use in the piece created.

Both men were engaging, funny and enlightening and Janet Smith a wonderful facilitator.

Questions asked by the preshow audience allowed for more knowledge as well. I was very impressed when asked the question: How long did the chorographers’ work with the Ballet BC dancer, Matteini said the dancers learned his piece in three weeks and Glumbek said his piece took two and half weeks for the company to learn. Both choreographers were impressed with the versatility of the Ballet BC dancers and made many compliments to the company members.

The first performance of the evening Diversion by Robert Glumbek was full atmospheric light and dark – angles squares shades of light, blackouts. Dancing was angular, fast, and full of low and floor movements.  No emotional connection between the dancers, no softness. The women were often on point which added more length, narrowness and sharp arrow like feeling. The dancers costumes were colorless. It was fast furious and beautiful.

Heavy dark harsh electronic music produced by Marconi Union that fits perfectly with the colourless empty stage bathed  in shades of atmospheric grey with  angles, squares and shards of light.

The second Parole Sospese  (Words Suspended)  again used and manipulated darkness on the stage.  His use of darkness, light  and space has a magical feel to it.

In his piece the stage is extremely dark and  full of illusion. We are slowly introduced to the stage – unseen curtains open – startling us into realizing there is an other levels to the depth .

There is almost a touch of buffoonery to the piece.  There is a "ringmaster" decked out in a tux. Rows and Rows of small lights are dropped down on, dancers move through them. They are pulled up and dancers dance under them. There are caterpillar movements, a cartwheel, a handstand and much of the dancing takes place with the dancers’ backs facing us.

It is beautiful evocative with Alice in Wonderland looking glass feel to it.

It was very interesting to see the different manipulation of light and dark by these two chorographers.

At the beginning of the night  of Ballet BC’s run of 3 FOLD it was announced that the line up had been changed and Simone Orlando’s piece Doppeling  was going to be shown last (rather than at the beginning as shown in the program).

It was a perfect adjustment. The blackness and wetness of the evening outside, mixed with the physical darkness -plays on light and dark – lots of dark- of the first two pieces made Doppeling iridescent.. I almost gasped when the curtain went up.

There was colour - muted and monochromatic – BUT  colour!  It was also the first time this evening when it was possible to actually see the dimensions of the stage and all the dancers in light.

The dancing was beautiful and clear and a relief from the other two pieces. It was as non linear as the others but with colour and we can see the dances well in their light coloured jumpsuits and strange white hair.  And we see them and they face us … we see eyes lips and the rest of the front of the head and body.  Mind you, they are unisexed so other than height so  much else is muted.

I suspect my reaction was partially do to the time of year – but nevertheless, the placement was the right one.  We had to go back out into to the rain even darker dark to get to our homes. It was wonderful  to have seen colour and brightness.

Also in continuation of my experience of Simone Orlando’s Doppeling was a comment while travelling home on the skytrain. that dove tailed nicely with Orlando’s.  In the preshow talk there was talk of classical ballet and the question was asked “What could classical ballet look like if it was stripped down?"

The comment from a person who also attended the preshow talk was:  "Doppeling was an excellent performance of this possibility.