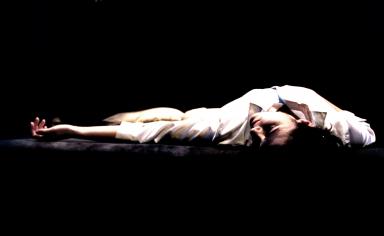 Those are things that Artistic Producer Michael Rubenfeld identifies as the qualities linking the work included in this year’s SummerWorks Festival.

Before coming to Toronto, SummerWorks was described to me as: “a fringe festival for professional companies”. While this is a bit imprecise (professional companies/artists also participate in fringe festivals after all) it does give you a sense of what it’s like. As a juried event, there is more control over the quality of the programming, yet SummerWorks is still imbued with that same sense of adventure that give fringe festivals their juice. It is the largest theatre festival in the country devoted to largely new work. Lasting eleven days and featuring 42 productions, it runs from mid-day through to late night at five different venues, concentrated around the Queen Street West area of the city. So it does have that sense of location and happening that we’ve come to associate with the Vancouver Fringe Festival.

In addition to risk and bravery, the jury also looks for work that reflects the urban feel of Toronto. This is programming unapologetically aimed at city-dwellers, for people looking to be challenged, engaged and ready to be taken to new places. What they get is new work or new takes on old work, new collaborations and fresh ideas. And with tickets at only $10.00 ($12.00 in advance) it represents tremendous value, especially when you look at what’s included in the program.

A number of shows fly the colours for Vancouver, including Any Night by Vancouver-based actors/writers Daniel Arnold and Medina Hahn. Arnold and Hahn enjoyed great success with Tuesdays and Sundays which has toured internationally. Any Night, directed by Alberta-based Ron Jenkins, is described as a mystery-romance about privacy, paranoia and violent sleep – so a bit like how I spent last night. It premiered last season at Victoria’s Belfry theatre.

Vancouver audiences have already had a mini-taster of Rumble/Theatre Melee’s co-production of Cosy Catastrophe, a section of which was presented as part of HIVE 2. I thought it was hilarious. How it will translate to a more traditional stage setting will be interesting as the HIVE show made great use of the creepy aesthetic of the space they had been allocated in the old factory space. Still, with Craig Hall involved, it’ll look cool.

[img_assist|nid=143|title=I'm So Close It's Not Even Funny|desc=|link=none|align=right|width=384|height=288]There is also a Rumble connection with I’m So Close it’s not Even Funny (winner of this year’s Templeton award for “I wish I’d thought of that title”). The producers, Toronto based Why Not Theatre, are participating in a residency program co-ordinated by Rumble and Toronto’s The Theatre Centre. The program, called Bridging That Gap, allows emerging companies – one from BC and one from Ontario – to develop, produce and tour a new work. The BC company involved in the residency is Vancouver’s The Chop. I’m So Close is a fable about the tyranny of time.

Other work that intrigues is Doom 2012 by Calgary’s Dandi Productions. Written by Doug McKeag, it tells of the end of the world which is only 4 years away. Really, it is. Don’t believe me, just google 2012. I’m also looking forwards to The Girl with No Hands by Jodi Essery and Talya Rubin, which is a re-visioning of a Brothers Grimm tale.

Another highlight should be If We Were Birds, a retelling of Ovid’s Tereus, Philomela and Procne – the story that inspired Shakespeare’s Titus Andronicus. This Groundwater production features an outstanding cast, including a chorus of ravaged women, each representing a 20th century conflict. Then there is Pelee, by Erin Brandenburg and Lauren Taylor, who created a stir last year in Toronto with their Fringe show REESOR. Pelee combines animation, failed inventions and live music. While Oonagh Duncan’s Talk Sixty to Me is a verbatim play based on over 100 hours of recorded interviews with sixty-year-olds.

This is Rubenfeld’s first year at the helm of the Festival and he has introduced a few innovations that will see the programming expand out into new areas. In addition to a late night (well, late night by theatre standards) music series taking place at The Theatre Centre, there is something called Inside the Box, which is being described as a performance gallery. It will take place on the second floor of the Gladstone Hotel where artists from different mediums – including Daniel MacIvor and Sarah Stanley – will present short pieces in seven different rooms. The pieces will cycle throughout the evening and there will be a cash bar.

Yes, it sounds like HIVE but Rubenfeld promises me that he had the idea before attending this year’s event in Vancouver. It’ll certainly be interesting to check out how the Toronto version of al carte performance evolves. Watch this space.