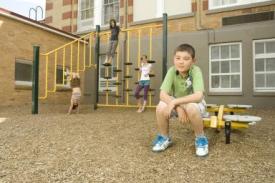 The kids of That Night Follows Day

For some reason, the last thing I expected to see at the sneak preview for PuSh ’09 was a live performance. So when I entered the Vancity Theatre and saw seven children (ages 8-14) standing before the big screen staring at me, I didn’t know what to make of it. Were they somehow related to the video that was about to be shown?

I was aware that Vancouver’s Theatre Replacement would be presenting a show with children in it at the upcoming festival, so I assumed their presence had something to do with that.

For several minutes I sat in the audience watching the children. The children watched us. Then they opened their mouths and spoke in unison:

You feed us.
You dress us.
You choose clothes for us.
You wash us.
You bathe us.
You clean our teeth.
You sing to us.
You watch us when we are sleeping.

You tell us that once the world was full of dinosaurs.
That whales may soon be extinct.
That some snakes are poisonous.
That water and electricity are not good together.

You teach us that in the world there are bad men.
That monsters are not real.
That words are only words.
That the shadows are nothing to be frightened of.

Composed by Tim Etchells of the UK’s Forced Entertainment for Theatre Replacement’s upcoming show, That Night Follows Day, these truisms issuing from the mouths of the children transcended their seeming banality. Each line opened into the theatre like a revelatory bloom of unexpected meaning. I felt like I’d never heard the words before. I felt like a prophet receiving the truth from a winged agent of God. Ecstatic and giddy, I fastened my attention to every syllable. I was on fire again — for the art of theatre and how it can re-invent the word and the world.

If this is a portent of things to come at this year’s festival, then look out. Honestly, it’s hard to imagine any local company other than Theatre Replacement pulling this off. It’s equally hard to see it happening anywhere other than PuSh. What can I tell you? If you’re looking for a regular theatre experience, you’ve come to the wrong place. It’s not that PuSh has nothing to do with conventional theatre. It’s that it stretches the meaning of theatre into that broader realm of surprises called ‘performance’.

So why does PuSh call itself a performance festival rather than a theatre festival? Yes it includes contemporary dance and music. But just crossing disciplines doesn’t get to the heart of the matter. Late 20th century performance fulfilled the promises of the early 20th century theatre. Performance was freed from the shackles of representation. What was happening ‘on stage’ was no longer necessarily a representation of something happening ‘off stage’. It became its own primary reality. In this world of immediate experience, the performer and spectator commit to an encounter — with each other, with themselves, or with something beyond such categories of being. Of course this kind of thing also happens in more conventional theatrical performances, at least to a small degree. But PuSh emphasizes a self-awareness of the roles, ‘spectator’ and ‘performer’ — often threatening to reverse them, and usually pointing up the spectator’s necessary complicity in the ‘act’ of performance.

When the children at the Vancity Theatre spoke to me, the collaborative nature of performance became beautifully stark. They were speaking to me as me, not as part of an ‘imagined audience’ in a fictional world. This of course raises the question, who is ‘me’ and who are ‘they’? I can’t speak for them. I’m not even sure I can speak for me, but faced with the children’s repeated “you” (“You feed us. You dress us.”)  I had to ask who the ‘me’ they were referring to might be? Was it me the actor, me the parent or me the student of theatre; the occasional odd-jobber, the brother, son, lover, the playwright, the poet, the hybrid Greek-Canadian? That is, which ‘me’ was I performing as spectator? All of the above?

Yes. If ever there was a case for “all of the above,” The PuSh Festival might be it.